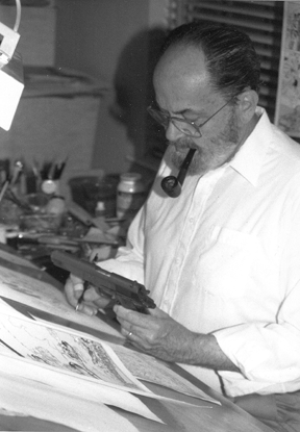 John Severin, Eisner Hall of Fame winner and one of the last of the legendary EC artists, died Sunday in Denver, Colorado. He was 90.

Severin was among the greatest draftsmen of the EC crew. He was especially well known for his western comics and war comics, but worked across many genres, including a 45 year stint drawing for Cracked magazine, doing numerous parodies and creating the definitive version of the company mascot, janitor Sylvester P. Smythe.

In recent years he had continued to work, with his last new material coming from Dark Horse last year on Sir Edward Grey: Witchfinder.

His family has released a statement:

Internationally acclaimed illustrator-­cartoonist, John Powers Severin (1921-­2012), passed away Sunday, February 12, 2012 at his home in Denver, Colorado with his family by his side.

Throughout his sixty plus year career in comic illustration and cartooning, Severin gained world-­wide notoriety and is regarded by many fans, friends, historians, and colleagues as a truly distinctive and brilliant artist.

Long-time friend and former president and chairman of Marvel Comics, Stan Lee states, “He had an art style that was uniquely and distinctly his own.The minute you looked at his artwork you knew you were looking at a John Severin illustration; it could be no one else. Besides his inimitable style, there was a feeling of total authenticity to whatever he drew, whether it was a Western, a crime story, a superhero saga or a science fiction yarn. Not only was his penciling the very finest, but his inking, too, had a distinctive Severin touch that made every strip he rendered stand out like a winner”.

Severin’s professional career was launched early in high school when he contributed cartoons for the Hobo News. Early in his career, his works were also published by Jack Kirby at Crestwood Publications’ Prize Comics. He co-created the long-running Native American feature American Eagle and continued drawing stories for Prize Comics through 1955.

Called an “artist’s artist”, Severin gained a reputation for his historical knowledge and detail in all genres, most notably war and western. Sharing a Manhattan studio with fellow classmates Harvey Kurtzman and Bill Elder from New York’s famed High School of Music and Art; Severin began drawing for EC Comics. His illustrations graced the covers and inside pages of several EC comic series’ including Two-fisted Tales and Frontline Combat. It was also during this time Severin’s colleagues, Harvey Kurtzman and William Gaines co-created MAD Magazine. Severin was one of the five original artists who played a part in launching the infamous magazine, illustrating features for MAD Magazine between 1952 and 1954.

Upon leaving EC Comics, Severin was sought after to help launch CRACKED Magazine, a new publication that would become the prime competitor to MAD Magazine. Severin, using the pseudonyms “Nireves”, “Le Poer”, and “Noel”, was the lead artist for CRACKED Magazine for an unprecedented 45 years.

Following the cancellation of EC’s comic book line in the mid-1950’s, Severin began working for Atlas Comics, the company that would eventually become Marvel Comics. After the transition to Marvel Comics, Severin contributed his illustrations to several popular titles including The Incredible Hulk, The Nam, Kull the Conqueror, Captain Savage, What The?!, and Semper Fi.

“One of my greatest regrets, as an editor, was the fact that John was so busy doing other things that I couldn’t give him as many assignments as I would have wished. If it were up to me, I’d have kept him busy drawing for Marvel seven days a week, fifty-two weeks a year,” states Lee. 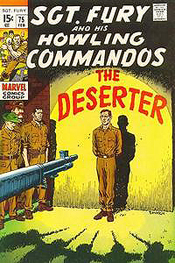 “John Severin’s distinguished work is personified by the quality of the man himself. “John Severin was one of the nicest, most decent, honorable, straight-shooting men you’d ever hope to meet,” states Lee. “Truly, the art world has suffered a great loss with John’s passing – but so has the human race. To John’s friends and fans worldwide, he has been greatly loved and will surely be greatly missed.”

John Powers Severin was born in Jersey City, New Jersey. After attending the High School of Music and Art he enlisted in the United States Army where he served in the Pacific Theater during World War II. He moved to Denver, Colorado in 1970. As a freelance comic illustrator and cartoonist, thousands of Severin’s illustrations have been published and admired by fans worldwide. John Severin is survived by his wife of 60 years, Michelina, 6 children, 13 grandchildren, 8 great grandchildren, a step great granddaughter and Severin’s sister, Marie Severin, who is also a comic illustrator and cartoonist.

John’s many credits include Warren’s famed Blazing Combat and Creepy, Charlton’s Billy The Kid and Cheyenne Kid, DC’s Sgt. Rock and The Losers, and Marvel’s Sgt. Fury and the Howling Commandos, Nick Fury Agent of SHIELD, Yellow Claw, and Conan. He also edited  EC’s Two-Fisted Tales while Harvey Kurtzman was hospitalized in the 1950s.

One of the truly great comics artists, we offer our condolences to John’s family and friends.