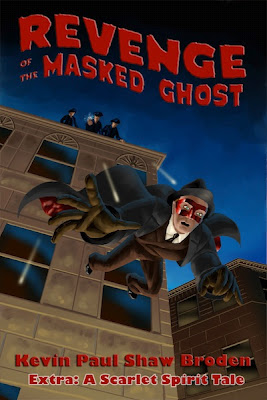 REVENGE OF THE MASKED GHOST, the second novel by author Kevin Paul Shaw Broden, charted as high as #70 in the Hardboiled Detective Fiction list for Amazon UK on the day it was released. It remained in the top 100 for several hours.
In the novel, a vigilante stalks the streets of the 1930’s Manhattan, and Margaret Randolph is terrified that he will break into her home. Even though her husband Donald tries to reassure her that it won’t happen, the mystery man known as the Masked Ghost steps in from a stormy night and dies at her feet. What is the secret of the Masked Ghost? Why did he come to the penthouse home of the Randolphs? Do they go to the police, or must they solve his murder on their own? Must this young couple be forced to bring about the… REVENGE OF THE MASKED GHOST? Written in the style of the pulp novels of the 1930s, REVENGE OF THE MASKED GHOST is the tale of a man obsessed and what that obsession does to his family. Originally released in serialized blog form, this compiled edition includes new interior black and white illustrations along with a never before published SCARLET SPIRIT backup tale.
Kevin’s first novel CLOCKWORK GENIE – a blend of fantasy, romance, and murder mystery – is still available.
REVENGE OF THE MASKED GHOST can be found at the following:
Amazon: http://bit.ly/zg3PcN
Amazon UK: http://bit.ly/xhWpgy
Smashwords: http://bit.ly/xDv5pX
REVENGE OF THE MASKED GHOST is soon to be available at most other online distributors.
Share