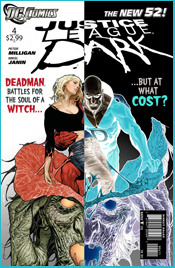 This past week, I read both Justice League #5 and Justice League Dark #5. To say they are worlds apart is a bit on-the-nose, but suffice to say… it’s the truth. Justice League proper is loud, dumb, and thin. Dark is the polar opposite.

With an issue left to finish its first arc, Justice League needs a near miracle to turn my opinion around. In issue #5, Dark completed its first arc and I’m amazingly sold on it. Funny then that I didn’t bring that book home. My wife, and mother to our newborn son, bought it cause she loves Zatanna. Trust me, I have a millions reasons to thank her everyday. Now? I have a million and one. But I digress. This here column is meant to compare and contrast just why JL: Prime is poop, and Dark is dynamite. I hope Geoff Johns is taking notes.

Let’s start with the good. Both Leagues assemble a pretty stellar line-up. I know there are those out there that have a soft spot for the less-than-great Leagues of the past (like when they were in Detroit, or the amazingly crappy team from right-before-the-flashpoint), but let’s be honest: The present day roster takes its Magnificent Seven approach ala Grant Morrison’s run, and it was damned smart to do so. On the Dark side, we get a team-up that’s a veritable who’s who of the mystic arts.

With the Vertigo imprint now a part of the DCnU proper, we get to see stalwart mystic go-to characters like Deadman team up with John Constantine, amongst others. All in all, the teams work on paper, quite well. And John’s use of Cyborg as the would-be-everyman makes me forget all about the obvious affirmative action. The only character I wish they’d put on the Dark team would be Detective Chimp. Face it, monkeys equal sales.

Now that we got that out of the way, let’s dive into the bad, shall we? Justice League takes too many cues from the worst part of comics from the 1990s. Jim Lee is delivering amazing work, but at the cost of quality narrative. Splash after splash, action panel after action panel, and everyone always screaming, wincing, and punching. Also, all of it is on fire. Now, is Jim to blame for this? I don’t know. Geoff Johns is the man behind the script, so one might ask him if he intended the first arc to be so… typical.

For a guy who built a career on amazing origins, here he delivers his first disappointing one. Think of all the stereotypical team-forming storylines you can think of. Heroes meet, and think each other is the villain? Check. Egotistical in-fighting for control? Check. The evil-villain-from-out-of-nowhere who can only be defeated by having the team form? Check. That basic premise has been done to death in just about every team book, and funny enough? JL: Dark uses it too! But somehow, they pull it off. I’ll get to that later.

As I recall comics of my youth (those pesky ‘90s), it was always about the pop and sizzle, never about the words. It was all about who could beat up who and how, never why. Then I grabbed Watchmen, Sin City, books by Scott McCloud, and Kingdom Come and learned that comics can be stellar cape and cowl adventures… and use nuance and subtlety to end a story. Justice League throws all of that out the window, so we can make way for everyone taking time to ask what Batman’s powers are. Snicker.

Justice League Dark takes that same convoluted plot and smartly dampens it for characterization. The first arc is the antithesis to the uniting of individuals for the greater good. Instead we have severely independent agents being routed to stop something against their will. Over the course of the book, characters do fight one another, but it’s done with nuance. When Deadman threatens John Constantine, it’s because he cares for June Moon, who Constantine is obviously hurting in order to save the greater good. No puffed up chests and snarky dialogue.

And the big bad of the book? Well it turns out to be the misguided Enchantress, who lost control due to Madame Xanadu’s misguided tinkering. And at the climactic battle, when the score is blasting, and characters shout… it’s not the uniting of the mystical mavens of the greater DCnU that saves the day. It’s just Constantine doing his job. When the dust settles, the team, as it were, stand as independent as they were at the books’ beginning. It’s a bold move by Peter Milligan, who opts to dose his Justice League with a bit of realism. Realism, is a comic featuring a guy who has a super secret all-powerful vest? Yup. And it’s pretty darned cool.

I’ve merely scratched the surface here. Now, before you fire up the engines of hate, let me act as my own Devil’s Advocate. Justice League has had some great moments. As I mentioned before, I think Cyborg has been a real highlight of the book, and Johns’ Hal Jordon is a cock-sure treat, especially when he gets his ass whooped. And truth be told, the sales figures put me in my place pretty quickly. And Justice League: Dark isn’t exactly narrative fiction perfected. Over five issues Milligan utilized the “two characters show up somewhere, and spend their time questioning why they’re there scene” about 27 times. And as ComicBookResources’ Chad Nevett noted in his review of issue #5. Milligan may need to do a ton of back-peddling to assemble his team for the next arc.

Overall though, I think it’s clear: Justice League thus far has been far too busy trying to bring the “oohs and ahhs” while Dark spent its time trying to develop its characters beyond witty retorts, and punching. The books are clearly targeting different audiences, but even those who prefer eye laser blasts and Batarangs to backwards spells and Photoshop glow effects…clearly see where the flagship of the DCnU is aiming only at the lowest common denominator. If the DCnU is to make those who don’t read comics pay attention, modeling their mainstay book off of Michael Bay mentality isn’t the way to do it.