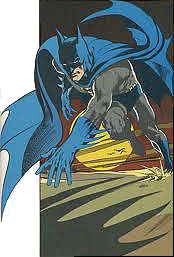 Almost every mistake I’ve ever made as a writer comes down to what I call a “Writing 101” mistake. I’ve been writing for a living for umpty-bum years at this point and you’d think I’d have graduated to at least Writing 102 mistakes, but no. It keeps coming down to the basics.

Here’s a helpful clue. When you’re running late, you only have time to do the job right. Take a deep breath, clear out the cobwebs, looks at the basics, and work carefully. It winds up saving you time.

I need to have that pounded into my head with a very large mallet every so often.

What are the basics? To start off it’s the classic questions of who, what, when, where and how. By who I mean not just the characters’ names but who they are – their background, their history, their backstory. Those around a character help define them – who are their friends, their family, who loves ‘em and who hates them.

What can be defined in many ways; some of the most basic include what does the character do, what is their function in the story – protagonist, antagonist, supporting character? For me, the What also comes down to What Does The Character Want and what are they willing to do to get it. That governs every scene, every line of dialogue. Also, What Is At stake? Life, money, fame, ruin, get the girl, get the guy – what?

When would seem a no-brainer, but taking it for granted is a no-brain mistake. One of the legendary changes that Denny O’Neil and Neal Adams made when they took on Batman was to clear away the muck connected with the campy TV show was to make Batman once again a creature of the night. It was that simple, that elegant, and that basic. When can include time of year, era, the season and so on. The amount of time elapsing also matters. How much later does one scene take place after the previous one – immediately, soon, much later, a few days? You have to know.

Where would also seem obvious but a generic location tells us nothing about the characters or the story; a specific setting reveals a lot. How big or small is the house/apartment/office/coffee shop? What posters or art are on the wall or the desk? Details matter. Look around your own abode; what you choose to put in it says something about you. Same with your characters. My office currently says I’m a lazy slob. It says it pretty loudly, too.

Why does the story happen in the order that it does? Why do the characters make the choices that they make? That’s motivation. More often than not, there is no single motivation and the multiple motivations can be in opposition with one another. Back in college I was seeing this girl and she, teasing me, said that if I had to choose between her and a chocolate cake, I’d have to think hard. I told her, “Nonsense, my dear. You exaggerate. I would always choose you – with infinite regret for having lost that chocolate cake.” See? Conflicted.

We often want more than one thing at a time and often try to have it all and usually fail – because we can’t make a clear choice. Why do people make bad choices? Because conscious and subconscious are both acting upon us and they are rarely in agreement; what the heart wants is not necessarily what the head insists on. As with life, so with your characters.

And then there’s how. How does your character go about getting what s/he wants or think they want? How far are they willing to go to get it? Do they use direct action, indirect action, do they lie, cheat, steal, kill? Are there boundaries they won’t cross or are there just boundaries they don’t think they will cross. What are the specific acts? If the character tries and fails to achieve their goals, do they come back and try again? The story is meant to show us how far the protagonist/antagonist will go to get what they want. It reveals what they need or think they need. Are these acts consistent with who the character is – not just who they thinks they are, but with who they truly are? Who they are dictates how the character acts.

Each one of these – the who, the what, the where, the when, the why and the how – influences the other and as you play one off the other, the character, story, and themes come more clearly into focus.

One last word about mistakes. You are going to make them. I know writers who got frozen because of being afraid to make a mistake. It has to be perfect. Got news for them – nothing is perfect. Everything a mortal can do is flawed somewhere. You just do the best you can at the time.

One of the best teachers I ever had in anything, a man named Harold Lang, advised us to make big mistakes; you learn nothing from small ones. The operative word here, of course, is “learn.” Make new mistakes; don’t keep repeating the old.

Now if I could just remember that for myself. Ah, well; I’m off to make some mistakes.