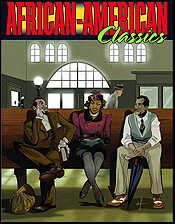 In the hopes of beating the Black History Month rush, I went to see Red Tails last weekend. George Lucas had been making the interview rounds and he discussed how difficult it was for him to get this film made. He ended up paying for it himself, but then couldn’t find a studio to distribute or market it. Apparently, they felt there was no profitable market for a film with no white actors in the leads.

That is so offensive that I had to prove them wrong. However, I missed opening weekend, and therefore probably contributed to the studio’s bigotry. And, if the truth be known, I don’t particularly like going to movies that draw crowds because I find most audiences unspeakably rude. However, in this case, I would suck it up. And also, I went at one o’clock in the afternoon on a Sunday.

There weren’t a lot of people there, with maybe half the seats filled. The audience seemed to be mostly white and mostly male. The trailer that got the best response was for the Farrelly Brothers Three Stooges. Yes, that surprised me, too.

Lucas said he wanted Red Tails to feel like a movie made in 1944 that was just released this year. That’s a good description. To me, it felt like a Blackhawk comic or a Sgt. Rock comic brought to life. It was Shrapnel as a movie. Awesome fight scenes, clear enemies (Nazis! Racists!), noble sacrifice and really entertaining characters. Screenwriters John Ridley and Aaron McGruder wrote an effective and economical (in terms of words, not budget) script. Yes, that’s Aaron McGruder of Boondocks fame.

On what planet would this movie be ghettoized? Oh, right. This one.

Which brings me to the comics portion of this column. I was lucky enough to get a review copy of African-American Classics from Eureka Productions. This anthology, edited by Tom Pomplum and Lance Tooks, takes the works of amazing writers like Langston Hughes, W. E. B. DuBois, Zora Neale Hurston and others and turns them into graphic story with artists that include Kyle Baker, Trevor von Eeden, Lance Tooks and more.

Like most anthologies, this one has stories I like and stories I don’t. In general, the ones I don’t like don’t have much story. They are instead mood pieces. My bias is against the genre, not the specifics here. In fact, if I’m going to read an illustrated mood piece, I’d prefer to read one with the unusual (to me) use of language here, and the vivid artwork.

I suspect this book will stay in print forever, a way to entice reluctant readers to seek out other works by these authors. It’s a great book to have on your shelves all year round, not just February.