Take to the Skies with Captain Midnight and Commander X: New Comic Book on the Horizon from Moonstone Books and Nemo Publishing 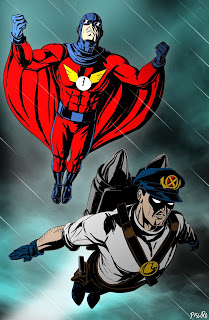 At the end of this year, Nemo Publishing and Moonstone Books will publish a cross-over one shot comic book featuring the legendary Captain Midnight and Commander X from Nemo Publishing’s “The Undersea Adventures of Capt’n Eli” graphic novel series. This 28 page, full-color book will be written by longtime DC Comics writer and editor Brian Augustyn. Artwork and co-plotting will be by Jay Piscopo, author and illustrator of “Capt’n Eli.”

“When real life casts long shadows over us and time seems to be running out, that’s the time to look to the skies for the antidote to modern worries,” said Augustyn. “I couldn’t be happier to be working with Moonstone, Nemo, and my great friend Jay Piscopo on this thrilling and timely project.”

This new book will feature guest stars from other Moonstone books, including Airboy and the Air Fighters, and will pay homage to the great heroes of yesteryear, particularly aviation heroes.

“I’m a huge fan of Captain Midnight and what Moonstone has done with the character. I see this as an opportunity to introduce new fans to this once very popular hero from American pop culture,” said Piscopo. “Working with a friend and a creator I admire so much and to team up with Moonstone is a dream come true.”

Captain Midnight is relevant today because he existed in a time similar to our own when the United States was in the midst of economic upheaval and the world was at war.

Augustyn noted “Captain Midnight has been a multimedia legend for 70 years and remains as vital today as when he first took wing. As ever, Cap delivers sky-high adventure and heroism in the classic style. Commander X is completely in sync with those ideals and will be the perfect partner in crime-fighting. Featuring the Air Fighters only makes it all that much more thrilling.”

Piscopo think it’s perfect timing to reawaken these WWII era characters and see what made them strong and interesting. “These characters stood for ideals; particularly the ideals of freedom, equality and fighting against fascism. The superhero genre blossomed during WWII because this is what they stood for.”

More about Brian Augustyn: Augustyn is an award-winning comic book editor and writer. He got his start in the industry in 1984 as an editor for Tru Studios’ “Trollords.” He then edited “Syphons” and “Speed Racer” for NOW Comics. In 1987, he joined DC Comics, starting out as a co-editor on “Action Comics” during its period as a weekly title. He then went on to edit “The Flash,” “Justice League” and the “Impact Comics” line of titles. Augustyn was recognized for his work in the industry with the Wizard Fan Award for Favorite Editor in 1994.

More about Jay Piscopo and Nemo Publishing: Piscopo is the author and illustrator of Nemo Publishing’s “The Undersea Adventures of Capt’n Eli” graphic novel series and “The Sea Ghost #1: The Sea Ghost in the Machine” comic book. Captain Midnight and Commander X are similar and unique in that they both were created as a vehicle for advertising a product. In the case of Captain Midnight, it was Ovaltine in the 1940s. Commander X is part of the Capt’n Eli universe of characters tied to the Capt’n Eli’s line of hand-crafted sodas from Portland Maine. Capt’n Eli is the namesake of real-life World War II veteran Eli Forsley who was also the inspiration for Capt’n Eli’s soda. Read the story behind the story at this link. On the web atwww.captneli.com and www.theseaghost.com.