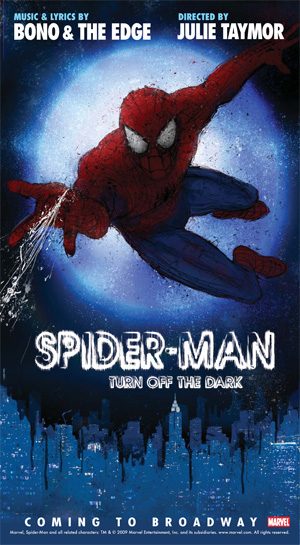 This is never going to end, is it?

Producers of Broadway’s “Spider-Man: Turn Off the Dark” have fired back in their legal fight with one-time director Julie Taymor, claiming the woman who they once called a visionary later failed to fulfill her legal obligations, wrote a “disjointed” and “hallucinogenic” musical, and refused to collaborate on changes when the $75 million show was in trouble. In a countersuit filed Tuesday in U.S. District Court for the Southern District of New York against Taymor and her company, LOH Inc., the producers argued that the show “is a success despite Taymor, not because of her.” The lawsuit, which quotes from several private emails from members of the creative team, further exposes the deep rift that has opened between former collaborators who seemed to have reconciled — at least through forced smiles — on the red carpet this summer when the musical finally officially opened.

Remember, these people are arguing about more money than Steve Ditko has ever received for co-creating Spider-Man. So when they talk about what they’ve “created”, feel free to laugh at them.

via ‘Spider-Man’ producers punch back at Julie Taymor – Yahoo! News.