DENNIS O’NEIL: Sherlock of the Movies 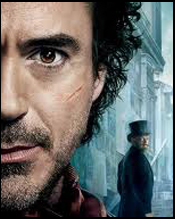 Ah, there you are. Still with us. Good. You survived the turning of the new year and the doom some are predicting hasn’t happened. Yet. But be of good cheer, you who are longing to manifest the death instinct that Sigmund Freud said is common among homo sapiens. According to something I read somewhere, the Big Erasure isn’t due until the fall. So we might yet be annihilated, thank you very much.

Meanwhile, we can read comic books and/or go to the movies. That’s what I did day before yesterday, went to my local monsterplex and saw the new Sherlock Holmes flick. And pretty much enjoyed it. Director Guy Ritchie and his associates have done what, I maintain, must be done with olden characters if they’re to appeal to contemporary audiences; he reinvented Sherlock and Dr. Watson and even Sherlock’s smarter brother, Mycroft.

Sherlock is still the world’s greatest “consulting detective” and Watson is still loyal, courageous and honorable and Mycroft is still brilliant and still needs to get to the gym, urgently. Nothing here alien to the 60 Holmes stories Arthur Conan Doyle gave us more than a century ago. But although Doyle’s Sherlock was occasionally a man of action – he could give a good account of himself in a donnybrook, by Jove – and he had a streak of the rebel in him, he was primarily a thinker and a scientist, and despite that tiny flavor of rebellion, he espoused the Victorian values: respect for order and tradition and law and, despite the denseness of some of the policemen he dealt with, also a respect for authority.

Those aren’t our values.

The world has churned and we know that science isn’t always benevolent and order is not the highest good and scoundrels can hide in tradition and authority figures…oh, come on! Check the headlines or a reputable newscast or two.

Mr. Ritchie and friends haven’t gobsmacked those quaint values – if you squint hard you might be able to discern them – but they’re largely ignored. What’s emphasized is comedy and action, along with enough science and ratiocination to qualify the hero as Sherlock. If you’re familiar with the Doyle canon, you might react to the movie’s references and rearrangement of plot elements. If you’re not… no harm, no foul. What you need is up there on the screen, though you might have to pay close attention to get it all.

I have one gripe, and for me it’s not a new one; I can level it against a number of entertainments. It’s this: much of the action is rendered in blurs and pans and ultra-swift cuts and so we popcorn eaters don’t know exactly what’s going on. The Asian actioners have demonstrated that there is considerable entertainment value in a clearly seen, cleverly choreographed fight scene. Why deny us that pleasure, particularly in a movie the budget of which is the size of Neptune? I mean, you can hire really good stunt people.