Pro Se Productions, Publisher of the monthly New Pulp Magazine PRO SE PRESENTS, announced today its magazine lineup for the first quarter of 2012!  This lineup includes not only works from multiple writers, both new and familiar to New Pulp fans, but also features the first collaboration between Pro Se and noted New Pulp Publisher, White Rocket Books!
“Pro Se is ecstatic,” Tommy Hancock, Editor in Chief of and Partner in Pro Se Productions, stated today, “to be working with White Rocket Books and especially its owner and premier writer, Van Allen Plexico.   Known as one of the leading New Pulp writers today and able to bridge nearly any genre, Van brings a special touch to anything he writes and creates.   For Pro Se to be able to give Van a vehicle to showcase his latest upcoming work HAWK in a monthly magazine format is an opportunity we couldn’t pass up.”
HAWK: HAND OF THE MACHINE is a stand-alone piece including an excerpt from Plexico’s HAWK novel, to be published by White Rocket Books in 2012, reworked to be a story all its own.  It spotlights the title character, a member of a force of protectors of space and its galaxies and planets.  HAND OF THE MACHINE will be featured in two parts beginning in PRO SE PRESENTS #7, February 2012, and ending in PRO SE PRESENTS # 8, March 2012.  HAWK will also be the cover feature for the March issue. 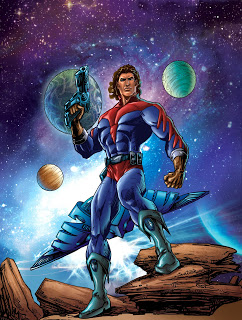 “I couldn’t be happier,” said Van Allen Plexico, creator of HAWK and Publisher of White Rocket Books, “to see HAWK getting to make his mark for the first time in the pages of PRO SE PRESENTS, before he appears anywhere else.  I think HAWK will appeal to readers of all sorts–from military SF fans to space opera aficionados to pure pulp action/adventure fans–and Pro Se has positioned itself to reach that kind of broad audience and bring them the best that New Pulp has to offer.

Plexico continued, “The readers of PRO SE PRESENTS will discover a new character and a new universe to get into and enjoy, and my own readers will check out the magazine and find in it a publication that they will truly get a kick out of every month.  My thanks go out to Tommy Hancock and his merry band of Pulpsters for giving HAWK this kind of spotlight to make his big debut!”
The tales that make up the rest of PRO SE PRESENTS for the January, February, and March issues only show how varied the New Pulp field and the content from Pro Se can be!   Featuring stories from various genres by Kevin Rodgers, Megan Smith, PJ Lozito, James Palmer, Frank Schildiner, Ken Janssens, and Ashley Strole Mangin, the first three months of PRO SE PRESENTS is full of intergalactic adventure, Private Eyes of a feminine persuasion, dimension hopping teenagers, monster hunting gangsters, masked heroes, eerie Villains cast in classic molds, and so much more!  Known for Puttin’ The Monthly Back into Pulp, PRO SE PRESENTS is headed up by Lee Houston, Jr., Magazine Editor in Chief and edited by Houston, Frank Schildiner, Nancy Hansen, and Don Thomas!
For more information on Pro Se and when PRO SE PRESENTS is available, like PRO SE PRODUCTIONS on Facebook and follow www.pulpmachine.blogspot.com and www.prosepulp.com for all the latest on Pro Se Productions!
Share