CAPTAIN HAZZARD BRAVES THE CITADEL OF FEAR ONCE MORE! 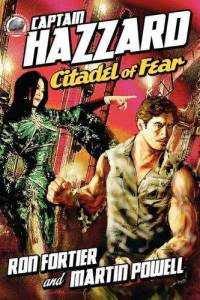 Airship 27 Productions is happy to once again announce the availability of its second Captain Hazzard adventure; Citadel of Fear by Ron Fortier & Martin Powell.

In 2011 Airship 27 Productions parted ways with their former publisher and many of their titles soon sold out at distributors such as Amazon etc. Eventually copies could only be found at various independent bookstores selling for exorbitant prices.

“It was always our intention to get all our titles back out in these new Airship 27 editions,” explains Managing Editor & Co-author Fortier. “Of course we have to juggle doing these reprint editions around our schedule for releasing new titles. It’s not always an easy task. Over the past year, many Captain Hazzard fans have written us complaining of the book’s unavailability at a fair and reasonable price.”

Fortier also notes that the remaining two Captain Hazzard novels that he has written; Curse of the Red Maggot and Cavemen of New York will also be offered in new editions as time allows. “Obviously it’s our goal to have all of them up soon and we thank our loyal fans for their patience in this process.”

When scientists from all studies begin disappearing, Captain Hazzard and his team of adventures take up the mystery which leads them to a secluded city of wonders deep within Rocky Mountains ruled by the daughter of a would-be world conqueror. The book is the first co-writing venture between Fortier and Powell, long time friends and features interior illustrations by Art Director Rob Davis with a stunning cover by Laura Givens.

Fortier is currently writing a fifth Captain Hazzard novel he hopes to have completed soon.