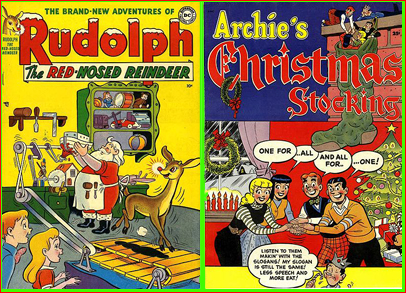 Holiday-themed comics have long been a tradition, along with holiday-themed… everything else. That’s cool; if you can’t make a buck pushing Santy Claus, when can you?

As far as our four-color medium is concerned, we inherited the tradition from the newspaper strips. These guys went all-out, and back when there were still a lot of continuity strips stories would be interrupted for Christmas and New Years (Hanukkah rarely, Kwanza, Ramadan and Saturnalia never) or, better still, holiday themes would be incorporated into the ongoing story. This was carried over into proto-comic book form when Will Eisner and his largely Jewish crew produced their annual “Christmas Spirit” story.

Outside of Santy-themed covers, it took a while for the comic book publishers to reliably produce annual holiday fare. The two that lasted the longest where Archie’s Christmas Stocking (with variations on that title, including the all-embracing evil “holiday” word) which started in 1954, and DC’s Rudolph The Red-Nosed Reindeer, licensed from Robert L. May, who owned the glowing streetkill. That title commenced in 1950. Dell had special Christmas editions of the various Disney and Warner Bros. cartoon characters, and before long most other publishers jumped on the sleigh.

As a child, Rudolph The Red-Nosed Reindeer confused me. That’s a statement you don’t often read, but it’s true. The original series ran for twelve years, which meant twelve issues. All were unnumbered. At some point I understood DC didn’t number their first issues (I later discovered why), but I knew Rudolph to be an annual event. A collector even as a child, I wanted to know how many issues I had missed. The title continued in various formats – giants, tabloids – until it was no longer worth the licensing fee. Yet holiday-dedicated superhero comics continued; DC was way ahead of the curve with its Holiday Special (sic) going back at least to 1980.

This year, we continue to have holiday output from Archie – including a trade reprint of Stocking stories – and a pretty nifty tome from Marvel that first appeared as individual digital stories. This latter book is one of my favorite Marvels of 2011. But unless I overlooked a page in the Diamond catalog, nothing from DC Comics. No Christmas title, no Holiday title, nothing from the company that pretty much started it all.

At first I thought Mark Waid just didn’t need the money this year and is probably overbooked writing every seventh title published. But then it dawned on me.

Maybe Bill O’Reilly is right. Maybe there is a War On Christmas. After all, those bleeding hearts at Warner Bros. studios now have full control of the company, and Bill and his friends at the New York Post keep telling us they’re heartless bastards. I guess this is proof.

O.K. Fine. I’ve got my Marvel holiday comic, and my Archie reprints, and besides, I firmly believe there ain’t no sanity clause. But I’m sentimental enough to wish you-all a wonderful holiday season.

Quite frankly, we deserve it.