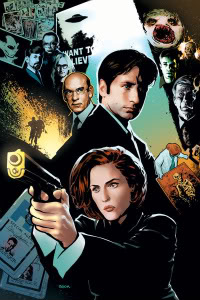 The new X-Files movie comes out July 25, and that week also sees the debut of a tie-in comic book series from WildStorm.

Entertainment Weekly has a preview of X-Files #0, from series co-producer and co-writer Frank Spotnitz. Check that out right here.

The truth? It’ll be out there in theaters when The X-Files: I Want to Believe opens July 25. But thanks to Frank Spotnitz, the franchise’s coproducer and cowriter, it’ll also be available in comic-book form two days earlier, when DC’s The X-Files #0 hits stores. While the film takes place after the TV series’ end, Spotnitz’s title (illustrated by Iron Man: Hypervelocity

Issue #0 is a story Spotnitz always wanted to tell, but never had a chance to. And it will, in fact, springboard into a few original comics miniseries set throughout seasons 2 and 5 of the show. Also, these tales will feature a familiar evil force. But we’re getting ahead of ourselves. To jump-start the X-Files’ long-awaited resurrection, DC and Spotnitz have given EW.com this exclusive first look at pages from The X-Files #0.

A funny little side note: DC posted a news item about this on its home page, right here. But if you click the link, you’re taken to this wholly unrelated site.

Looks like Grant Morrison’s insiduous usurpation of DC is much farther along than we’d thought.