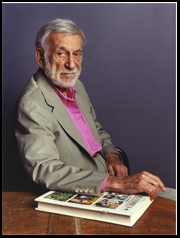 Comics legend Jerry Robinson died this morning at the age of 89.

Best known for his work with Bob Kane during the earliest days of Batman, the Trenton, New Jersey born artist started off as a teenager lettering and inking the Batman feature in Batman, Detective Comics and World’s Finest Comics. As Batman rapidly grew in popularity, he progressed to the role of character designer and, shortly thereafter, penciler of the feature. It was Robinson who named Dick Grayson “Robin,” not after himself (as often reported) but after N.C. Wyeth’s famed illustrations of Robin Hood. Shortly thereafter, Jerry designed Batman’s most famed enemy, The Joker. His original art for that initial design, in the form of a playing card, has been on display at various museums across the nation.

(It should be noted that the late Bob Kane disputed this and most other creator-credits regarding The Batman. As a matter of contractual obligation, DC Comics gives Kane sole creator credit for the feature, a matter of significant dispute with Robinson as well as writer Bob Finger.)

In later years, Robinson started an international newspaper syndicate (the Cartoonists & Writers Syndicate) and wrote an important history of the comics medium, titled The Comics: An Illustrated History of Comic Strip Art. He also served as president of the National Cartoonists Society in the late 1960s.

His other comic book work included Bat Masterson and Lassie for Dell Comics, Black Terror for Standard Publications, Green Hornet for Harvey, Vigilante and Green Arrow for DC (with his friend and frequent collaborator, Mort Meskin), Green Lama and Atoman for Spark Publications, Journey Into Mystery, Battlefront, Crime Exposed, Strange Tales and Battle Action for Marvel, Rocky and His Fiendish Friends for Gold Key, and Astra for Central Park Media.

Jerry received numerous honors and tributes during his long life, including four separate awards from the National Cartoonists Society: the Comic Book award in 1956, the Newspaper Panel Cartoon in 1963 for Still Life, the Special Features Award in 1965 for Flubs and Fluffs, and the Milton Caniff Lifetime Achievement Award in 2000. He was inducted into the Comic Book Hall of Fame in 2004 and, in 2010, was the recipient of the first annual The Hero Initiative Dick Giordano Humanitarian Award for his “outstanding efforts in changing comics one day at a time.”

The Giordano award focused on Jerry’s less-well known work as a political activist obtaining the release of jailed and tortured cartoonists in Uruguay and the Soviet Union. He also joined Neal Adams and others in the creator rights movement and aided Superman creators Jerry Siegel and Joe Shuster in their struggles with Warner Communications / Time Warner in obtaining recognition and financial security for their efforts.

[[[Jerry Robinson: Ambassador to the Comics]]], the definitive history of this critically significant cartoonist, was published by Abrams late year.

On a personal note, I had the honor and privilege of dining with Jerry and discussing both politics and comics on numerous occasions during the 1970s, 80s and 90s. When, last year, we met up at the Baltimore Comic-Con at the reception prior to his Giordano Award presentation, I found Jerry to be as gracious, as warm and as sharp as he had ever been, and he entertained my daughter with stories peppered with quotes from material I had written about him many, many years earlier.

It was one of the most wonderful moments of my life.