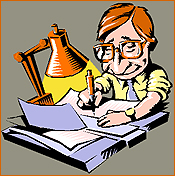 So there I was, sitting at my desk, surrounded by the detritus of the editorial life, not being productive, listening to the voices coming from across the hall: a fellow editor and a freelance writer engaged in something about half way between discussion and argument.

Editor: It’s not the kind of thing we publish.

Writer: But it’s what I want to write!

But it’s what I want to write!

Another volley of buts, both articulated and implicit, and the meeting ended with the writer still needing to find a way to pay his bills.

I was an editor for more than two decades; you know whom I sided with.

But…what was with the writer, anyhow? Was this an instance of an ego bloating up and strangling its host? Or – and here we enter The Region of Psychological Murk – was the writer subconsciously sabotaging himself so he wouldn’t have to face the possibility of failure?

Or did he have something?

I mean, the writers (and artists) are the creative ones, right? Shouldn’t they be allowed to go where their instincts take them, tugging readers, publishers and those rat bastards known as editors along behind them?

In a word: no. But this is a qualified no.

Begin with the implicit contract between publication and consumer. People have a right to the kind of entertainment (or information) they’ve paid for. Fail to provide it and they’ll fail to continue buying your product.

Now, the qualification on the previous but: What was stated in the preceding paragraph is not an insistence on storytellers repeating the old, shabby tropes, month after month, year after year until the sun cools. If they do, they’ll lose their audience as surely as if they weren’t delivering what the audience is paying for. The material has to be either current or somehow timeless and current is a lot easier. If it isn’t, the audience won’t be able to identify with it and they probably won’t be interested for long. Things change – things must change. (Sorry, you anti-Darwinists, it’s that kind of universe.)

I’m not advocating change for its own sake; that might be another form of ego-bloat. No, I’m saying that an altered world – altered technology, altered mores, altered institutions – suggests new kinds of storytelling that can be achieved without violating the premises of character or genre. Or writers might try delving into what already exists – finding elements already in the material that have been ignored and using it for the sort of story fodder that readers will find fresh and entertaining while, again, preserving character and genre. Or a writer might involve his fiction in subject matter that is new to it, but – yes, again – doesn’t wreck what the reader already likes.

Does all this squash self-expression? Not a bit of it. A long time ago, Raymond Chandler said that the trick to writing genre fiction was to give the reader what the reader wants while getting what the writer wants in, too. Chandler himself proved that it can be done.

RECOMMENDED READING: Ego: The Fall of the Twin Towers and the Rise of an Enlightened Humanity, by Peter Baumann and Michael W. Taft. This splendid little book delivers exactly what the title advertises.