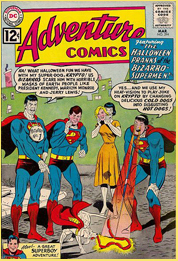 Bizarro Mindy Newell’s column debut last Monday inspired me to trash the column I had in mind for today and instead tell you the story of Bizarro Marilyn Monroe and Bizarro John F. Kennedy. Well, let’s say postpone – the first rule of deadline writing is “thou shalt not never ever throw any idea out.”

Way, way back in the days shortly after newsprint replaced papyrus and the stapler revolutionized the magazine industry, DC Comics published a monthly called Adventure Comics. At this moment in time – February 13, 1962 – Adventure’s lead feature was “Tales of the Bizarro World,” based upon the popular characters running rampant through the DCU of the era. If you’re even thinking about asking if these stories were in continuity, please immediately see your doctor about Obsessive Compulsive Disorder.

DC’s approach to humor at the time allowed for inside jokes as long as they didn’t interfere with the story. Batman #66, “The Joker’s Comedy of Errors,” is perhaps the grossest evidence of this. The editor of Adventure Comics was Mort Weisinger, and there’s been a lot of stories told about the guy. He was rough on writers – they would have to pitch several stories only to be rejected and fed a premise to work on instead. I’m told some pitches would then be given to another writer. Perhaps the writer was better suited for the concept; perhaps Mort was just a sadist.

Anyway, what is less known is that Mort Weisinger was pretty heavily wired into the political and celebrity scene. The DC job was a three day a week gig, and he did a lot of writing for “legitimate” publications such as the highly credible newspaper magazine insert, This Week. I don’t know how close he was to the Kennedy family, but he ran in those circles.

What people did not know during President Kennedy’s life was something that is common assumption today: JFK had quite a sweaty relationship with Marilyn Monroe. The media knew all about it, but back then they didn’t print such stuff.

Boy, how times have changed.

So we pick up Adventure Comics #294 (cover-dated March 1962) and we find the story “The Halloween Pranks of the Bizarro-Supermen.” That’s an odd story for springtime. Halloween being what it is, various Bizarros dress up as Jerry Lewis, John F. Kennedy and Marilyn Monroe. Bizarro Superman #1 (don’t ask) donned a Mickey Mantle mask. Marilyn was almost always seen next to JFK.

Was this a remarkable coincidence? The story was written by Jerry Siegel and, for the record, was drawn by John Forte. It certainly is possible that Weisinger fed Siegel the gag. According to second-class mailing permit stats, the average sale of Adventure Comics in 1962 was 460,000 copies. Even if Mort sent copies to some of his friends, I’m guessing the number of readers who did not get the joke was around… 460,000. The story went into a different direction, evolving into a saga about the friendship between Bizarro Krypto and Bizarro Lex Luthor, with Bizarro Kltpzyxm (sic) and the “real” Krypto tossed in for good measure.

Whereas there is no physical proof of a relationship between the two celebrity Earthlings, Seymour Hersh’s The Dark Side of Camelot makes a pretty good case and various confidants of both individuals have acknowledged the liaisons over the years. Marilyn died (one way or another) in August of 1962, a half-year after Adventure #294 was published. JFK was murdered 15 months after that – 48 years ago last week.

Now we flash-forward to 1976. DC President Sol Harrison thought it would be cool if I met Mort Weisinger because of our mutual interest in politics. Mort and I had a fascinating conversation that ran about two-and-one-half hours. I asked him about the Bizarro Marilyn / Bizarro JFK story. At first I thought I made him angry, but his broad facial gesture turned into a huge laugh. “You know, you’re the only guy to ask me that!” And that was his only response.

A tip of the green visor to the Grand Comics Database for confirming the data, and to Bizarro Mindy Newell for pushing the snowball, umm, up the hill.