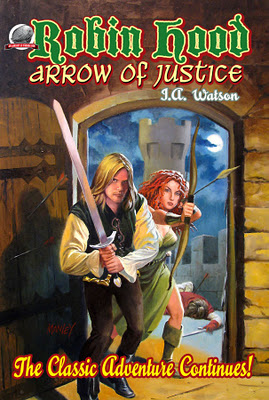 Airship 27 Productions & Cornerstone Book Publishers are happy to announce the release of I.A. Watson’s second book in his new retelling of the classic Robin Hood legend.
In book one of this series, “Robin Hood, King of Sherwood,” award winning author Ian Watson introduced the classic outlaw hero from British lore in a fresh and exciting new way. We learned of a carefree youth suddenly cast into the role of hero to save his people from the cruel and sadistic tyranny of Prince John, left to rule over the kingdom while his brother, Richard the Lionhearted traveled to the Holy Lands to fight in the Third Crusade.
Suffering under unbearable taxation, the people suffered daily until the brash young outlaw, Robin of Loxley, at the goading of a lovely young maid, stepped forth to challenge this illegal oppression and restore true justice to the land.  In this second chapter his daring robberies of the jaded gentry have stirred the ire of the Sheriff of Nottingham and his allies. A devious plot is hatched in the guise of an archery contest to lure the daring Robin Hood within the city limits and there trap him.  Once more Ian Watson spins a tale of action and adventure steeped in rich historical lore as he relates perhaps the most reckless of the Robin’s famed exploits.  Can the King of Sherwood, aided by his loyal and of rogues, claim the prized Golden Arrow or will the walls of Nottingham become his tomb.
Robin Hood, Arrow of Justice is another rollicking grand adventure that continues this innovative and wonderful retelling of a truly classic legend loved by millions.  This volume once again spotlights a gorgeous painted cover by Pulp Factory Award Winning recipient Mike Manley, with interior illustrations and designs by Art Director Rob Davis.  Airship 27 Productions is thrilled to return to Sherwood Forest in;
Robin Hood; Arrow of Justice
This is the tenth release of 2011 for the popular pulp production outfit and their 43rd catalog title.  “It’s been a remarkable year,” said Editor Ron Fortier, “and we’re thrilled to be ending in on such a high note.”
Airship 27 Productions;  Pulps For a New Generation!
ISBN: 1-613420-27-7
ISBN-13: 978-1-61342-027-0
Produced by Airship 27
Published by Cornerstone Book Publishers
Release date: 12/07/2011
Retail Price: $16.95
$3 digital PDF Available Now.
(http://homepage.mac.com/robmdavis/Airship27Hangar/index.html)
Share