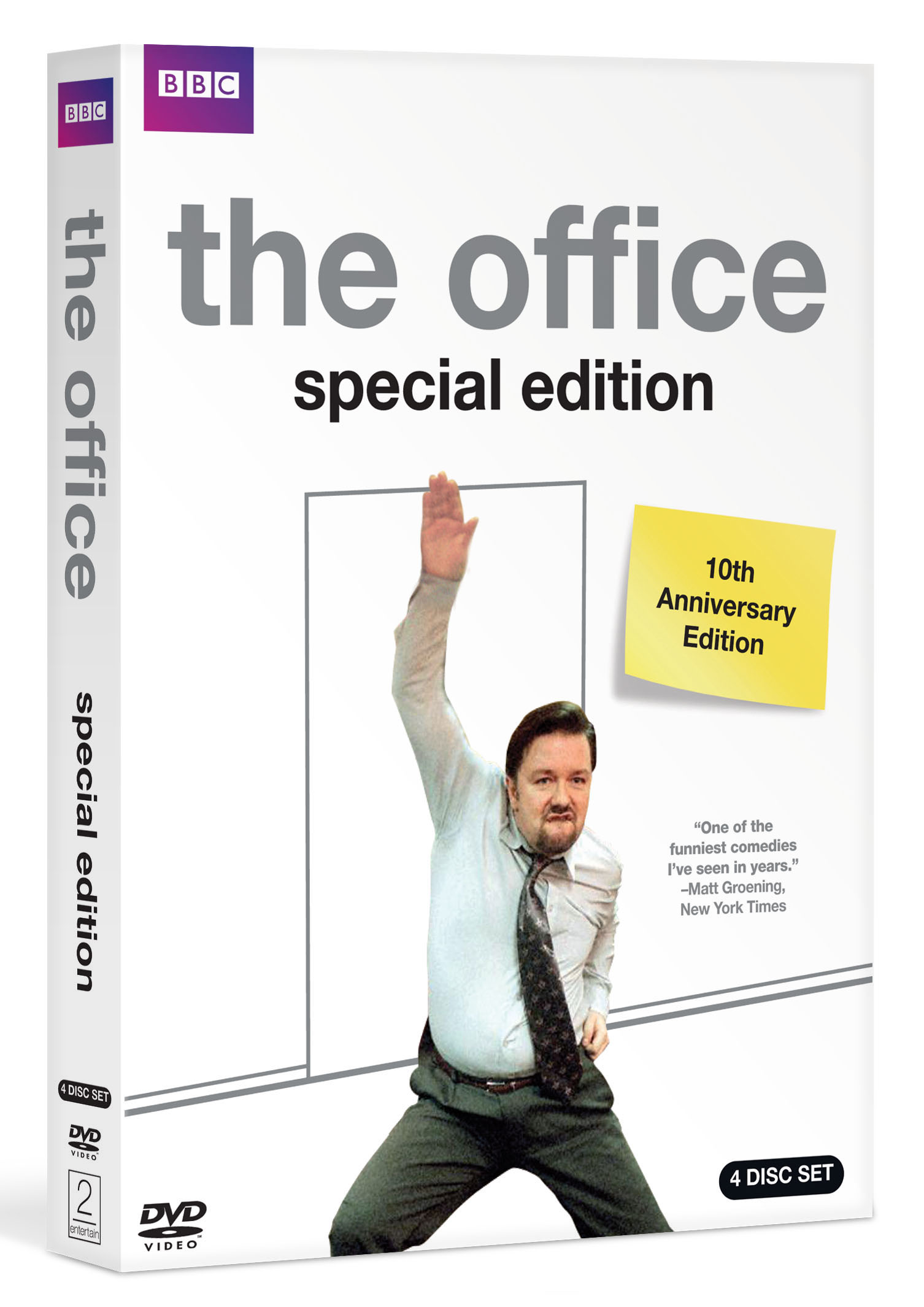 There are times we lose sight of Ricky Gervais’ comedic genius now that he has become a celebrity in his own right. The news that he will once again host the Golden Globe Awards brings with it nervous anticipation but the better news is that The Office Special Edition is coming out this week from Warner Home Video. The 2001 series is collected in its entirety with both Christmas specials included along with new featurettes plus the original bonus material.

Never before has there been a television series set in an office environment that felt so accurate even though there were some distinctly English touches. Coming two years after Mike Judge’s brilliant Office Space, Gervais and partner Stephen Merchant gave us the employees at Sough’s Wernham Hogg Paper Company and a mockumentary style that has been imitated by numerous shows ever since.

Gervais’ David Brent is everyone’s worst nightmare of a boss; a man who desperately wants to be liked and is willing to ignore the company’s smooth running so as not to ruffle anyone’s feathers. He’s surrounded by your basic office drudges, self-deluded ladder climbers, and the utterly clueless. With sharp writing and excellent casting, the series arrived on BBC 2 with a splash and it wasn’t long before American audiences embraced it. As happens all too often, NBC snapped it up for adaptation but in a rare feat, managed to do so successfully. With Steve Carrell and a wonderful ensemble, the show quickly exhausted the source material – a mere twelve thirty-minute episodes — and found its own voice.

In reviewing the original, it’s still funny and recent enough so the office environment still feels spot on. The smarmy Brent is aided by Assistant to the Regional Manager, Gareth Keenan (Mackenzie Crook), competent salesman Tim Canterbury (Martin Freeman), secretary, Dawn Tinsley (Lucy Davis), and warehouse worker Lee (Joel Beckett). Their lives and careers intersect and intertwine in amusing ways, showing us insight into not only office life but the state of affairs for the common people. There are nasty politics, fizzling office romances, worries about the company’s fate, and the more mundane day-to-day matters that propel the stories, with the characters taking their turn addressing the camera. For example, the very first episodes has Hogg’s Jennifer Taylor-Clarke (Stirling Gallacher) arrive to inform Brent one of the regional managers is about to be made redundant while Gareth and Tim fight over a stapler. A later episode shows how desperate Brent has become when he sabotages an outside contractor (Vincent Franklin) who has arrived to conduct some training. Later, he overhires and then is forced to fire someone, a fitting close to the first season of six stories.

Series Two picks up a short while later as Slough and Swindon offices are merged and Brent gets a new boss, Neil Godwin (Patrick Baladi). Brent’s attempts at humor finally backfire when corporate hears he’s been telling racially insensitive jokes. Meanwhile, all the Slough employees admit they dislike working for Brent, with most wishing they were anywhere but at Hogg. He falls upward, being hired to do some motivational talks, only to find himself competing once more with Neil. 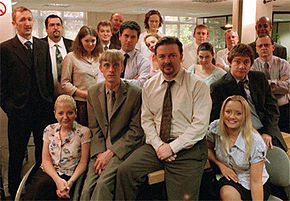 The two holiday specials pick up where series two left off, as we find Brent now fired from Hogg and selling cleaning supplies. The simmering romance between Tm and Dawn finally moves forward when she returns from Florida to meet with the documentary crew which is trying to conclude their work.

As with previous releases, the transfer from the broadcast films are fine and are certainly nice to watch in high definition. We get new introductions from Gervais and Merchant, accompanied by series fans (and comedy stars) Matthew Perry, Ben Stiller, and mockumentary pro Christopher Guest. There’s a new piece with members of the cast chatting about the show’s impact and we get to see the demo that was shot to sell the series.

The previous Series One and Two extras such as the deleted scenes, outtakes and video diaries make return appearances here. The Specials disc comes with the same featurettes: The Office: Closed For Business Documentary, The Golden Globes Featurette, If You Don’t Know Me By Now music video, and Full Band Version Of Freeway Love.

The Specials disc also contains the original pilot episode that convinced the BBC to buy the series. Such works in progress allow you to see how raw the original ideas are and how they were polished to a brilliant sheen by the producers. BBC specials Comedy Connections: The Office and How I Made The Office are included, covering some of the same territory but thoroughly walk you through the background of the creators, the process of selling then making the show and their reaction to its international embrace. Wrapping things up are web videos covering The Beginning, The Style, Comedy, Staff Training and Impact.

ComicMix fans know and love the genre offerings from the last decade, but you really need to have this to better understand many things such as British humor, office life, and just how good something can be when the creators are left alone to do their work.