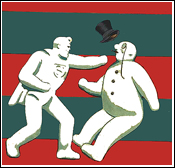 By now you know, unless you’re a fan who really reads nothing but comics and sees/hears nothing that’s not comics related: we had us a storm, we north easterners, and it was a humdinger. Lots of snow – lots! – before Halloween which royally screwed things up hereabouts and drove Mari and me onto the wet and gleaming roads looking for a motel with a vacancy because our house had neither heat nor light. Main problem seemed to be that the trees still bore leaves and their weight, added to the weight of the snow, caused the timber to fall, much of it across power lines. Cue music:

Away in a manger

No crib for a bed,

Lay down his bald head…

Okay, wrong holiday and we did a bit better than Joe the Carpenter and his family. We found a Holiday Inn near the Jersey border that had suffered a cancellation and so we didn’t have to spend the dark hours in a cold house, a car, or a manger.

And you know, I’m not complaining! I choose to live here, partly because I like the seasons and, as Diana Ross admonished, “take the bitter with the sweet.” Mari and I can consider the whole thing an unexpected little adventure, though if the power hadn’t returned this morning, I’d probably be calling it something else.

Of course, if I lived in Peter Parker’s New York I wouldn’t be bothered by meteorological matters. Same would be true if I lived in Metropolis, Star City, Gotham City…anywhere in comicbookland. There’s seldom snow there, or much rain, not a lot of wind or heat or humidity, and that’s a minor league shame.  Not that I’d want Pete’s Spidey suit sticking to his armpits, or Batman have to put on galoshes over his boots. But in a story, weather can be a tool. It can add texture and realism to the fictional settings, complications to the hero’s various quests (and without complications, those quests aren’t terribly involving). It can even be a major plot point, one that drives the action of the narrative. Or a source of humor. Or a reflection of the protagonist’s psyche. It can establish mood and it can help to establish locale. It could give a city character, as fog does for London and San Francisco or rain does for Seattle.

What is the weather like in Star City? Does the local television weather guy begin every report with, “It looks like another bland day here in our area…”

The exception, as is so often the case, is Central City, the New York doppelganger where Will Eisner’s Spirit fought whatever Eisner thought up to give him problems. It rains there. And snows. And gets warm. And the stuff is a joy to read, and if you’re looking for some recommended reading, well…most, if not all, of the Spirit stories have been reprinted. What I’m saying is, no excuses.

But for now…Hey look! A tree has fallen across my front yard. That hasn’t happened since…the damn hurricane a few months ago.

Maybe I should move to Metropolis.