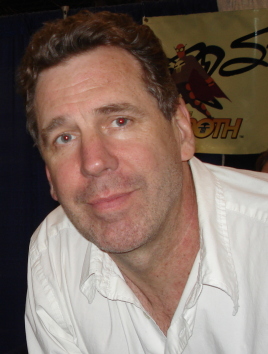 Steve Rude, co-creator of Nexus, was arrested last night in a dispute with his neighbors. The charges are assault and failure to comply with a court order.

He’s out on bail now, but will still have to raise legal fees. Mark Evanier notes:

This means you have one of those great opportunities to simultaneously help out a deserving guy and get yourself a great bargain. Go to his website and buy something. In fact, while you’re there, buy several somethings.

via news from me.

The Beat notes that the Rudes live in Maricopa County is the homebase of Joe Arpaio, “America’s Toughest Sheriff”, who’s known for housing inmates outside in 145 degree heat, feeding them spoiled food, and other practices that have gained notoriety and lawsuits from organizations such as the ACLU and Amnesty International, and rulings from federal courts over various violations of the US Constitution– you know, cruel and unusual punishment, violating civil rights, racial profiling, election law violations, and abuse of power.

And just to tie it back into comics, Arpaio created an armed illegal immigration operations posse in 2010, to help his deputies enforce immigration law. One member of the posse? Lou Ferrigno.

More information as we get it.