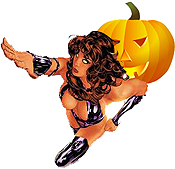 In my lifetime, Halloween has come out of the closet. When I was a kid, it was just for kids. Now, there are special pop-up shops for costumes for grown-ups. You can buy as many different kinds of home decorations for Halloween as you can for Christmas.

Halloween gives everyone in our Puritan culture permission to act out our wildest fantasies – for one day.

I always wanted to go as a superhero.

Back in my day, there weren’t a lot of superhero costumes for girls. There weren’t even that many for boys. My mom graciously made me a Supergirl costume in third grade, but, when I was older, she was less interested in enabling me. I was Peter Pan once, which felt almost like a superhero. And, since then, I’ve been a ninja at least once. It’s an easy costume when you can stroll over to Chinatown for materials.

There are those who like to be frightening on Halloween. And, while I get that (and zombie is an easy costume, if you have access to stage make-up), it isn’t what appeals to me about Halloween. I suspect it’s a generational thing. In my day, girls were supposed to be sweet and supportive, damsels to be rescued, a way to motivate the male hero to act. For Halloween, anyway, I could be the major character in my story.

No wonder my mom had to make my costume.

Nerd culture is peaking these days, so there are lots more super-hero costumes. Unfortunately, these costumes, inspired by the comics, don’t do much for a little girl’s power fantasies. They continue to sexualize – even fetishize – the bodies of the female characters. It’s cruel to see a little girl in a Wonder Woman or Supergirl costume, cut up to the top of her thigh and exposing her not-yet-developed cleavage. The boys’ costumes often include built-in abs and pecs, which contribute to their fantasies of being superhumanly strong. I have yet to see a costume for a little girl with built-in cleavage. I guess I should be thankful for that.

When my mom made my costume, she made it out of corduroy – this being at a time when spandex was not readily available. It was warm, especially with my cape. She made it big enough for me to wear extra layers underneath. You can’t do that with a commercially made superheroine costume. If you go trick-or-treating, you need to wear a coat, and then no one can see who you are. In fact, if you live in a rent-controlled apartment and have crummy heat, you need to wear a coat inside.

It’s insidious, and I doubt it’s really a conspiracy. Rather, I think these ideas are so ingrained in our culture that we don’t notice. The message to little girls is that they can have fantasies, but these fantasies must still be arousing to men. Girls can be princesses and fairies and Amazons and sometimes even witches, but they have to be pretty and they have a to show some skin.

At least they aren’t making Starfire costumes. Yet.

Martha Thomases enjoys Halloween less now that no one gives her candy anymore.