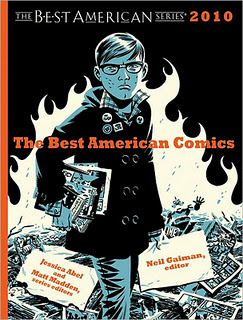 I have not read as many books as I wanted to this year, nor have I written about as many of the ones I did manage to read. (I didn’t manage to save as much from the flood as I would have liked, either; it’s a low-batting-average kind of year.) But the year is not over, and I can catch up on one of those fronts very quickly, viz:

edition. (Particularly since the 2011

book is out now, all shiny and new, so this is terribly old news.) Each editor shifts the material somewhat — Gaiman’s volume leads off with a long excerpt from the Jonathan Lethem/Farel Dalrymple/Gary Panter Omega the Unknown, the first Big Two story in the series, which feels significant — but the core of each book is very similar, drawing from the same group of major mid-career “alternative” cartoonists, from Gilbert Hernandez (here represented by a story done with his vastly less-prolific brother Mario) to Ben Katchor to Chris Ware to Peter Bagge to Bryan Lee O’Malley to C. Tyler to Robert Crumb. As usual, the series editors, Jessica Abel and Matt Madden, picked a hundred notable works from their year — September 1, 2008 through August 31, 2009 — and sent those to Gaiman, who chose from them (and, possibly, from a few things he discovered on his own) to make this collection. Gaiman’s introduction makes it clear that this isn’t the “best” comics of the year — nor even the best “American” comics of the year, whatever that may mean — but it is a big collection of a lot of very good comics (and a few clunkers, though precisely which ones are clunkers may be a matter of personal taste) at a reasonable price. The whole series is a great way to discover what’s going on over on the more interesting, less punchy side of the modern comics world, so I recommend this book, as I do its predecessors, for people who like stories told in comics form, though probably not for the kind of people who like the things that draw in the crowds of maladapted boy-men every Wednesday. 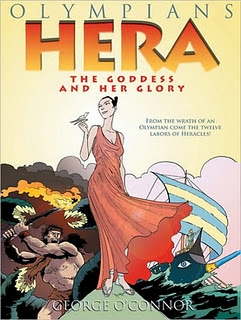 George O’Connor’s Hera: The Goddess and her Glory

is the third in a series of graphic albums — published to be appropriate for younger readers, but not dumbed down for them, in a neat sidestep that O’Connor has gracefully mastered — retelling, very faithfully and well, the stories of the Olympian gods and goddesses. (The first two covered Athena and Zeus; they are both also excellent.) Hera is a bold choice for this early in the series; she’s the goddess of marriage and childbirth, two very adult (and boring, to kids) things, as well as used in most mythological retellings purely as an antagonist, either the shrewish wife of Zeus who drove him to wander or the nasty cuckolded wife piling torments on her roving husband’s blameless sons. O’Connor does get into that side of Hera’s life — much of this book is a retelling of the labors of Heracles — but she’s the heroine of her own story here, smart and poised and utterly in control, even when Zeus goes haring off after yet another pretty mortal princess. O’Connor’s knack for telling his stories in ways that are appropriate for smart pre-teens but with buried hints of darker matters for older readers is just as keen as in the previous books, and his afterword — which is as scholarly as it is enthusiastic — dives deeper into the mythological underpinnings of his story and O’Connor’s thoughts as he put it together. And his art is as evocative and moody as before; his monsters are truly monstrous and his world is full of wonders. This is an amazing series, absolutely perfect for those mythology-loving kids and just as enthralling for those of us who discovered Edith Hamilton much longer ago than we care to admit. 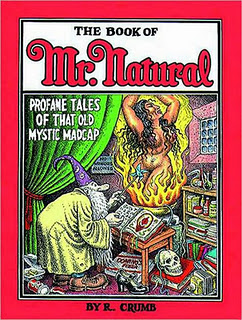 I don’t know if I have anything coherent or meaningful to say about R. Crumb’s The Book of Mr. Natural, the collected stories of a character who is very much a product of a very specific time — and that time was before I was born. Mr. Natural is described on the back cover as a “bearded, robed, curmudgeonly guru,” but, really, he was just one in a long line of Crumb stand-ins, embodying one particular part of Crumb’s own psyche to make particular points about contemporary society. Natural was the hippie side of Crumb, I suppose, forever disdaining all kinds of restraints, seeking mystical guidance from supernatural forces of one kind or another, and, most centrally, nakedly questioning the point of life and what, if anything, we’re supposed to do with ourselves while we’re alive. He does this, most usually, in pseudo-Socratic dialogues with Flakey Foont — yes, these characters were conceived in the late ’60s, and that permeates everything about them — who is just as stereotyped an “Establishment” “square” “straight man” as Natural is a stereotype old hippie. (Though Crumb did anticipate what the real hippies would turn into, a couple of decades ahead.) I find it all a bit sad and woolly-headed, forty years later, but I am a well-known grump with no soul; more spiritually-oriented folks are likely to get more out of Natural’s antics than I do. 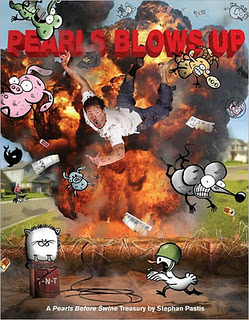 And last for this installment will be Pearls Blows Up

, the fifth treasury edition reprinting Stephan Pastis’s morbid and pun-filled Pearls Before Swine comic strip. I’ve written about this strip a number of times before, and I’ve never had all that much to say about it — it’s a fun, occasionally dark, not-terribly-well-drawn, and usually very fun newspaper strip, and I greatly appreciate with without feeling the need to anatomize what makes it good. So: this was another one, with more Pastis annotations (which make any cartoon collection better), and it was just as enjoyable as the others.