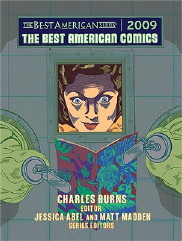 Long ago, the wise minds at the “[[[Best American]]]” series of annuals at Houghton Mifflin – now covering everything from sportswriting to mystery stories – realized that they didn’t need to wait for the calendar year to turn, if that was bad timing for their deadlines. They could simply declare some other standard 365-day period to be their “year” and stick with it. And so this book has 2009 in its title – since that’s the year it was published, and consumers are noticeably reticent to pick up a book that appears to be outdated – but collects Charles Burns’s choices for the best comics of the year that ran from September 1, 2007 through August 31, 2008. (And why shouldn’t that year be just as legitimate as the one that begins on January 1st, or September 19th, or February 14th?)

This is the fourth entry in the [[[Best American Comics]]] series; 2008 was edited by Lynda Barry, 2007 by Chris Ware, and 2006 by Harvey Pekar. All of those guest editors come from what’s vaguely the same end of the comics world – art comics rather than commercial comics, personal stories rather than assembly-line works-for-hire – but they’re each idiosyncratic individuals, with their own tastes and agendas. So the Best American Comics books have certain family resemblances, but each book is quite distinct.

For example, this year’s book contains stories by 33 creators or teams, 16 of whom didn’t appear in any of the previous three volumes. (And those include major and recognizable names, including Dash Shaw, Laura Park, Tony Millionaire, and Gilbert Hernandez.) Six of those pieces are excerpts from longer works, including Jason Lutes’s [[[Berlin]]], Ted Stearn’s [[[Fuzz and Pluck]]], and [[[Skim]]] by Jillian and Mariko Tamaki. That’s the largest number of contributors yet, mostly because there are more short pieces – 2009 has 17 creators with at least ten pages each, which means the rest just have a few pages, often a short sequence from a strip-style comic.

Each year has a gestalt feeling imparted by the guest editor – 2006 felt political and autobiographical, driven by Pekar, while 2007 saw a turn towards the formalist with Ware. Last year’s book was both warm and expansive, turning back to autobiographical stories but mostly picking personal ones, and at the same time embracing long excerpts of major graphic novels. Burns’s book has a slightly old-school vibe, harkening back to the ‘80s alt-comics movement as well as finding a home for other kinds of deliberately retro works, like Tim Hensley’s ‘60s teen comics piss-takes, Sammy Harkham’s neo-medieval “Black Death,” and Koren Shadmi’s “Antoinette,” which feels like a mildly deconstructionist ‘60s short story.

The bizarrities one might have expected from Burns’s editing are mostly absent – nothing from Paper Rad or David Heatley; a relatively sane and straightforward CF story (“Mosfet Warlock and the Mechlin Men”), a Ron Rege, Jr. story (“Cruddy”) that adapts a chapter from a Lynda Barry novel rather than haring off on his own as usual. Burns does pull in his old ‘80s compatriots, like Doug Allen and Kaz, for this book, along with more recent workers in the same space, such as Millionaire.

The time period Burns was looking at overlapped significantly – but not entirely – with the year 2008, when I read comics even more extensively than usual as a judge for the Eisner Awards. So, if it seems to me that there are major and important works missing from this book, it may be that I’m either mischaracterizing the time period Burns had to work with, or wishing for a much larger and more expansive book. (I just went back to confirm that the amazing – in content as well as physically – Kramers Ergot 7 was published in November of 2008, outside of Burns’s window.) It may well be that every piece that I vaguely feel should be here – both the ones I can remember specifically and the larger mass that I can’t – were all outside that window, or replaced here by work from the same creator that Burns liked better. This is the first year that I’ve seen a “Year’s Best” in comics after having read a huge mass of the possible stories; one’s opinion towards such a book is quite different when one already has a vague Platonic version of one’s own anthology bouncing around one’s head.

High points in the actually existing book include Chris Ware’s “Jordan W. Lint,” telling a man’s life – not quite as hopeless and depressive as usual for Ware – at one page for a single day from each year; Laura Park’s closely observed autobiographical story “Freaks;” Kevin Huizenga’s understated and elegant take on video-game shoot-em-ups, “Glenn Ganges in Pulverize;” and a fine excerpt from one of the very best books of 2008, Jillian and Mariko Tamaki’s Skim. There were some stories I didn’t entirely connect with, but there aren’t any particular “low points” to mention – this is all good work, worthy of being here.

Best American Comics 2009 offers over 300 pages of the best modern comics, from a wide range of excellent creators, at a hardcover price less than you’d expect to pay for a similar-length novel. It’s one of the great bargains, and great packages, in the modern comics world, and anyone with the slightest interest in comics – beyond the people-punching-each-other variety – should make sure to get it, this as every year.