DYNAMITE’S LORD OF THE JUNGLE BEGINS THIS DECEMBER! 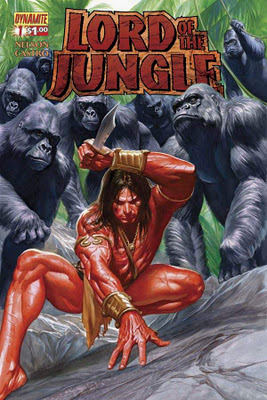 September 21, 2011, Runnemede, NJ – The original Lord of the Jungle returns! Dynamite is proud to announce the December release of Lord of the Jungle! Dynamite’s Lord of the Jungle is true to Edgar Rice Burroughs original tale, savage, violent, and uncensored for the first time in its 100 year history! We are so proud and excited about this book, that we are offering the first FULL issue for the introductory price of just $1.00!

Based on the classic Edgar Rice Burroughs adventure story, Tarzan of the Apes, the first of his famous series, which initially began publication in All Story Magazine in 1912. The saga of Greystoke begins in December, written by Arvid Nelson and illustrated by Roberto Castro, and featuring covers by Alex Ross, Lucio Parillo, Ryan Sook, and Paul Renaud!

“Tarzan’s DNA is in everything from super heroes to space epics,” says writer Arvid Nelson. “But I was surprised at how little I knew about him, because the many adaptations wander very far from the original character. His true story is so much deeper and more interesting — that’s we’re trying to bring to life in Lord of the Jungle.”

“To allow the series to be accessible to fans old and new, we are offering the first issue at the Introductory Price of $1.00 for the full ENTIRE 32 page comic, as well as dedicating both of the Dynamite front gate folds of the October shipping Previews Magazine to our launch,” says Dynamite Entertainment President and Publisher Nick Barrucci. “Get on board for the biggest comic book launch this December!”

DYNAMITE ENTERTAINMENT was founded in 2004 and is home to several best-selling comic book titles and properties, including The Boys, Green Hornet, Vampirella, Warlord of Mars, Bionic Man, Game of Thrones and more!

DYNAMITE is consistently ranked in the upper tiers of comic book publishers and several of their titles – including Alex Ross and Jim Krueger’s PROJECT SUPERPOWERS – have debuted in the Top Ten lists produced by Diamond Comics Distributors. In 2005 Diamond awarded the company a GEM award for Best New Publisher and another GEM in 2006 for Comics Publisher of the Year (under 5%). The company has also been nominated for several industry awards, including the prestigious Eisner Award.