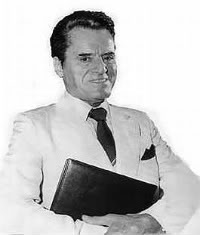 Raymond Leblanc, who helped create a worldwide phenomenon from the comic book series Tintin, died on Friday, according to an article in the Economic Times. He was 92.

The Belgian publisher helped create the Tintin Journal, which ended up bringing the characters of cartoonist Herge to audiences in several continents. From the article:

A resistance fighter during the Second World War, Leblanc convinced Tintin’s artistic creator Georges Remi to launch a periodical for the young. Herge had encountered difficulty publishing his work during the war.

The iconic boy reporter character had first appeared in 1929, with 12 books already under Herge’s name, but the association with Leblanc saw Tintin become the hero of a fortnightly magazine born in 1946 to immediate success.

A translated interview with Leblanc given not long ago is available at Forbidden Planet, and gives an incredible insight into Leblanc and his career in comics. Here’s a small sample, detailing the beginnings of the Tintin legacy:

“Why not publish an illustrated magazine for young people?”, one of my partners asked at a certain point. We thought this was an interesting idea, and started looking for a name. We ended up eventually with Tintin, after Hergé’s comic book hero. Literally everyone knew that character at that moment. The question however was, where was Hergé? Nobody knew where he was. During the war he had worked for Le Soir, a paper that was controlled by the Germans, and so he had been branded a collaborator. My associate André Sinave went to look for him, and was able to find him.

Now we only had to find enough money to start up the magazine. Our plan was a bold one, especially since Hergé was being prosecuted at that point. His first reaction was “This is impossible”. Nevertheless, we presented him a five year contract. “And we as resistance men will do everything within our powers to return your civil rights to you.” You have to remember that Hergé wasn’t even allowed to ride a bicycle at that time. Hergé hesitated for a long time and consulted with his good friend Edgar Pierre Jacobs. In the end he agreed. I think because he had liked us from the moment we met. I had thought before that Hergé was quite an old man, since I had read the adventures of Tintin since 1929. He turned out to be only a few years older than myself.