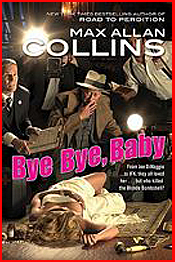 Nate Heller is back, and I’m a happy man.

For those of you who won’t have a clue to what I’m talking about, let me explain.. Nate Heller is a fictional private eye in a series of historical hardboiled detective novels and short stories written by the redoubtable Max Allan Collins. Some of you will know Max from his comic work on Ms.Tree and Wild Dog and more will know him from his graphic novel, Road to Perdition, which was made into a terrific movie by the same name which maybe even more people will know. (Actually, it’s fun to spring that on a lot of non-comics reading folks. The usual comic book movies – Superman, Batman, Iron Man, X-Men and so on – they know but lots of unsuspecting folks are stunned they when get told that Road to Perdition started as a graphic novel.)

What you should know Max for, though, is the Nate Heller series as well as the rest. A quick disclaimer – I know Max personally and like him but I got into the Heller novels before I met him and was a big fan of the series from the start. Heller is a private detective set largely in Chicago in the 1930s when the series begins and he gets neck deep in cases involving the famous, the infamous, and the scary from that time. Max, along with his research buddy George Hagenauer and, early in the series, Mike Gold, aids in the research on these cases and often comes up with interpretations and theories that I think are rock solid.

For example, in his Heller book on the kidnapping of the Lindbergh baby, Stolen Away, for which he won his second Shamus Award in 1992, Max posits that the “corpse” of the baby that was found could not have been the Lindbergh baby so convincingly that I think it should be in every history book.

Above all, what Collins does over and over again is take historical characters, people we know from histories or news reels or whatever, and make them real in ways that, perhaps, regular history can’t. They’re complicated, conflicted, contradictory human beings. Yes, Max makes up things for them to say and do but they are so close to what we know of their historical selves that it rings true to me, over and over again.

A case in point is the latest in the Heller series, and the first in nine long years, named “Bye Bye Baby.” It deals with the death of Marilyn Monroe and this is the place where you get the standard SPOILER WARNING. I may reveal things that are in the book and if you want to not take a chance I’ll spoil it for you, skip to where it says it’s okay to read again.

Heller, and Collins, make a strong argument that Marilyn Monroe did not commit suicide, so strong that its past arguing as far as I’m concerned. What’s more important is that Max fleshes out Marilyn as a person and a creative artist and not some poor bimbo who was a victim of her own success.

She’s not the only historical character Max brings to life in this book. Frank Sinatra, Sam Giancana, Jimmy Hoffa, Peter Lawford, Joe DiMaggio (in a not very flattering portrait), and especially Bobby Kennedy are all featured and really well drawn. While I’m not totally crazy about the solution to the mystery of Marilyn’s death, it plays and works within the context of the novel. I’d be really interested to talk to Max and find out who he really thinks was responsible but this is a mystery novel and something has to be worked out that is satisfying to the genre, the lead character, and ultimately the reader.

OKAY, IT’S SAFE TO COME BACK NOW. I’m recommending not just this latest addition to the Nate Heller series but all of the books which I believe have come back into print. Max himself suggests starting with his “Nitti trilogy” of True Detective, True Crime, and The Million Dollar Wound but it’s also true you can pick up just about any of the novels and start there. He also a collection of the Heller short stories out in paperback called Chicago Lightning. I haven’t read it yet but I’m going to and soon. Max says it’s also a good place to sample Nate Heller.

If you like a good hard boiled tale told well or just a chance to watch history really come alive on the page, give ‘em a try. You’ll come back and say, “Ostrander, I owe you one.” Glad to do it, my friend. Glad to do it.