MICHAEL DAVIS Is Bringing Sexy Back 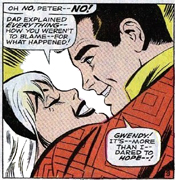 I am far from being a prude.

In fact, I’m so far away from being a prude the next level in my open mindedness would be to become a prude.

I’ve met a lot of prudes in my life and nothing makes a prude more prudish than their views on sex.

Me? As long as it does not include kids or animals I say what ever floats your boat sexually, have at it. You would have to be into some sick shit (kids, animals, Republicans) to disgust me.

I’m not quite at the point that I’m disgusted by the depiction of some women in superhero comics but I’m far from all right with it and have not been all right with it for a while now. It’s just a real turn off to me and it’s also one of the reasons a lot of people still think comics are juvenile fare at best.

The depiction of super titty women is not something I consider as important to be concerned about like some sicko who’s into gerbil love or some other crazy action.  I guess for the most part absolutely unrealizable depictions of women with breasts as big as a weather balloons is harmless, except for giving young men a bullshit unrealistic view of women and demeaning women in all sorts of ways. But other than that, it’s harmless.

But-that does seem to be what the audience wants, though it seems to me the 38 double-D tits, tiny waist and banging booty that appear to be the preeminent portrayal of women in comics is just silly in this day and age. Yeah, I can hear the decades old ridiculous argument “they are drawn that way for the 15-year-old boy audience.”

Perhaps the reason for the big titty women is to insure that no conservative family value group complains that comics are nothing but guys in tights pounding each other.

That can’t happen. It would destroy the sanity of marriage.

So I guess we are stuck with the 15-year-old boy defense for the reason that big titty superhero women are on the rag…I mean all the rage!

I often wonder what the wives and girlfriends of the artists who draw big titty super women think. But then again, maybe that’s the problem. Maybe most of these guys have no wife or girlfriend. Maybe they just need to get laid.

Well if that’s the case I’m not here to judge, I’m here to help. Follow the steps below and your pent up frustrations will soon be a thing of the past.

Step 2: Buy the ugliest or the fattest girl a drink or seven.

Step 3. Get real drunk yourself.

Note: for even faster action, buy a fat and ugly girl the drinks.

This works. Trust me. How do I know? It’s in the Newt Gingrich and Herman Cain handbook and just look how much tail those guys are getting.

On the very, very slim chance there is a woman artist out there drawing big titty women in comics the followings are steps that you can use to get laid.

Step 2. Look for the guy trying to get a fat or ugly woman (or both) drunk.

Step 5. In about two minutes after he is “tapped out,” leave and go home and work.

By the way, shame on you for being such a slut.

Look, kidding aside, I’m a big a fan of big titty women with tiny waist and banging booty as the next guy but I prefer real and not plastic.

That’s the problem with the way some artists depict woman. Their depictions just do not ring true.

Yes, I know that neither does a guy who comes from another planet and can bend steel in his bare hands and who, disguised as Clark Kent is tapping the ass of one of the few female characters who is not a big titty woman. I know that does not ring true either but that’s a non-truth I can live with.

The new guys would do well to take a page from some of the masters of comic book art. They took the time and effort to draw women with grace, style and attitude and those women were hot!

Gwen Stacy as drawn by John Romita Sr. is the hottest comic book woman character ever created bar none.

Gwen Stacy was not a superhero but she was still a piece of ass to beat any other piece of ass.

Jack Kirby’s Sue Storm was so fine that she was my second pretend girlfriend. The first was Gwen Stacy and the third was Laurie Partridge.

I’m proud to say as a proud African American man, all my crushes now are of women of color…Asian.

I don’t expect anything to change anytime soon with regards to super big titty woman but maybe some artist will read this and check out how the greats did women.

Give that a sec.

That would be sexy.

I miss you Gwen Stacy. I’m sad that the Green Goblin broke your neck.