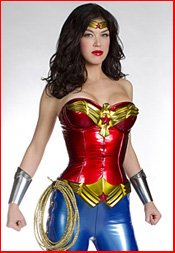 Oh, alas. Rest your sorrowing gaze on the gap, the fracture, the breach, the crack, the cavity, hole, crevice – might it even be a lacuna? – and join my lament.

And what, exactly, is that lament? And the gap/fracture/breach and the rest…what are we referring to here?

Well, in case it’s not obvious by now…we’re complaining about the absence of superheroes in the television season that’s a’borning. Not that such an absence is exactly novel. Since Superman made his video debut in 1952 – the Man of Steel was TV’s first costumed superguy – there have been more years without broadcast superheroes than years with them. But they have been sprinkled throughout the schedules in an odd, here-and-there fashion.

Some of them may have been among your favorites. Remember Captain Nice and Mr. Terrific? The Hulk? Electra Woman and Dyna Girl? Shazam? Isis? The Flash? The Greatest American Hero? How about Sesame Street’s Super Grover? If you can tolerate your superheroes minus costumes, the list can be expanded: The Six Million Dollar Man and his female counterpart, The Bionic Woman; The Dark Angel, which introduced many of us dirty old men to Jessica Alba – and yes, we are grateful; Buffy the Vampire Slayer (more gratitude from the DOM squad); the SyFy channel’s Alphas…

I’m not going to insult you by mentioning Batman, but do you recall the show that was apparently meant to capitalize on Batman’s popularity, The Green Hornet?

This list is, I’m sure, incomplete, but you get the idea. Superheroics have been almost television staples for a long time – not as constant as cop action or goofy folks doing goofy things in the sitcom universe, but pretty familiar.

Not currently, though. We thought we’d have an adaptation of one of the classic comics characters to amuse us in prime time and I, for one, eagerly anticipated the new Wonder Woman, as presented by David E. Kelley. Mr. Kelley – he deserves the honorific – is, arguably television’s best scripter, especially now that Aaron Sorkin’s gone elsewhere. I’ve been aware of him ever since Picket Fences in the 90’s and I think Boston Legal was a small weekly miracle. (His current show, Harry’s Law, is pretty damn good, too.) One can’t help wondering: what would Kelley, whose previous work never got near fantasy-melodrama in any form, have done in such unfamiliar territory? I can’t say that we’ll never know because, these days…DVD? Limited cable exposure? YouTube? But we don’t know now. (Or do we? Do you have information that I lack?)

Know what would be swell? To see Wonder Woman as I first saw Superman 1952. Not knowing that some of the scenes depicting the destruction of Krypton were borrowed from theatrical movies, or noticing that the special effects were less than awe-inspiring – did they even qualify as special effects? No, just looking and accepting whatever was there, without judgment, being amused or bored as the occasion demanded.

But I’ve seen and read and written so much much much…and hell. I’ve even been an editor. I don’t have the capacity to look with an innocent mind at superheroes, or anything else, and that’s the real fracture in my life.