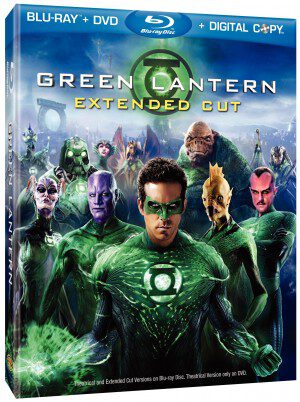 The problem with Green Lantern is that for something that was epic in concept, the film felt ordinary. It appears the producers looked at Iron Man and decided that was their template, retaining the look and feel from the comics, trying to ground it in reality with a likeable hero and monumental threat requiring the good guy to overcome his personal demons to save the day. The film cratered as a result, putting Warner Bros on the spot and casting a shadow over the new DC Entertainment administration. The film returns this week on Blu-ray from Warner Home Video complete with digital copy and some neat new bells and whistles.

The transfer is glorious and the CGI stuff really looks swell here but little of this sheen can mask the misfires, including the horrible GL mask Ryan Reynolds is forced to have painted over his nose. His Hal Jordan was recruited to join an intergalactic law enforcement corps, acknowledging the existence of extra-terrestrial life for the first time and rather than explore what all that meant, they kept dragging the audience back to Earth.

As a result, we got one scene of Hal being trained by Kilowog, but later hear the big poozer take credit for successfully preparing him for duty. We see Sinestro (Mark Strong) as the first among equals without being given any clue how the Corps worked as an operating unit or anyone really explaining things to Hal, like how often he needs to charge his ring (and recite the oath each time). We take no time to share with Hal the sense of wonder of meeting 3599 other lifeforms nor does anyone sit him down and say, “Hey, in your sector keep an eye out for the…”

That could have set this film apart from the Marvel Universe series and allowed Green Lantern to stand tall as a unique feature. Also missing was a memorable score (seemingly a dying artform), a theme for the GL Corps that could have stood alongside the theme to Superman or the Imperial March. James Newton Howard missed a terrific opportunity for immortality here.

We do get, though, nods to the comic and have Amanda Waller (Angela Bassett) shoehorned into the story but the writers forgot to give her a personality (they did use her background from the comics and as her godfather, I take pride in that). She is The Wall, an implacable government agent who you do not mess with and watching her match wits with Hector Hammond should have been something special. If she is to be the glue to link the DCU movies together, then they need to work on Bassett’s performance.

Sadly, GL’s parents – Martin Nodell, Bill Finger, John Broome, and Gil Kane – don’t even get a special thanks which is an unforgivable error on DC’s part (along with John Ostrander getting a nod for Waller). This extends to the disc’s special features which kick off with a 20 minute exploration of GL’s role in the DC Universe. We see Johns, Dan DiDio, Eddie Berganza, Dan Jurgens and a handful of others natter on with over half of the time given to current events while Nodell’s character and most of the Schwartz run are ignored. It’s as if GL didn’t exist before Johns resurrected Hal several years ago. What people need to remember is that when Hal was first introduced, being a test pilot was a dangerous but glamorous job. You had to have The Right Stuff to do that job and that’s one reason the ring chose Jordan. Instead, Hal here is too close in personality to Tom Cruise’s Top Gun pilot and far less interesting. At least they kept his brothers, giving him a strong link to the world than your typical heroic orphan or single child. More could have been done here, for example.

The movie kept missing chances to shine on its own so when it doesn’t feel like a Marvel movie, it steals from Superman. The hero saving the damsel from the helicopter is a nod to Superman’s but also takes the audience out of the current film by making them recall that gem. Instead, they should have left any such wink to the final moments of Hal flying high over his homeworld.   One of the film’s most charming sequences was when Hal tries to visit Carol (Blake Lively) as GL and she sees right through the cheesy mask. The scenes between these two appealing performers are among the best parts of the film. On the other hand, Peter Sarsgaard’s Hector Hammond is downright creepy but his evolution and menace should have been the B-plot setting up Hal’s return to Earth for the sequel. The parallels between Hal and Hector were so ham-fisted it was almost laughable.

When the movie worked to be its own production, it succeeded more often than not. Oa and the Corps looked alien, ancient, and wonderful. Hal standing up to the authority figures was terrific as was the complex relationship developed between Abin Sur’s replacement and Sinestro.

It made no sense though for the Guardians to agree to let Hal try and save earth from Parallax without sending backup. Obviously sending eight wasn’t enough, so what if they sent, oh, 1000 Lanterns as support? And if the trio of Lanterns were nearby enough to rescue Hal from the sun’s gravity, why didn’t they actively participate in the final battle? Actually, there should have been a scene where Hal specifically asked the Corps not to reveal their presence to humanity, which was going to be freaked out enough by the menace to suddenly learn there is other life out among the stars.

The film is provided two ways: the theatrical cut and an extended edition, stuffing ten minutes back in. The extra material is mostly upfront, a longer set up of young Hal Jordan’s life before his father died in the plane crash. While charming and nicely done, it does little to correct the more egregious flaws in the overall story.

The other features include an eight minute tribute to what Reynolds had to endure during filming along with several deleted scenes which goes to show how difficult it was to act in suits designed for the CGI artists with only partially built sets. One between Hal and Sinestro should have been kept but I can see why the others got trimmed out. The disc opens with the horrible thirty second trailer for the New DCU and also comes with a digital edition of Justice League #1 but there’s no explanation provided why this was here.

The combo pack comes complete with Warner’s new innovation: an UltraViolet Digital Copy allowing fans to download the standard definition theatrical version to a PC or Mac plus instantly stream it from a digital cloud to many computers, tablets or smartphones.