Review: ‘Indiana Jones and the Kingdom of the Crystal Skull’ 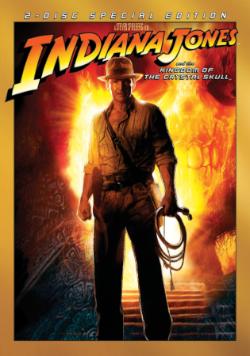 Sitting in the darkened screening room at Paramount Pictures that early May day in 1981, I had no idea what I was about to experience.  Working at Starlog at the time, I thought we were pretty much aware of everything cool that was coming from Hollywood.  But we knew little about this thing called [[[Raiders of the Lost Ark]]].  Then we watched it.

An homage to the action serials of the 1930s and 1940s, director Steven Spielberg and producer George Lucas combined their best skills to produce something iconic and fresh at the same time.  They also did what has become increasingly difficult ever since – create an interesting character from scratch.  Sure, Indy is one of a long line of adventurers dating back to Allan Quatermain if not further back, but still, he was new and cool.

Ever subsequent Indy film has been measured against the original and found wanting. I missed [[[Indiana Jones and the Kingdom of the Crystal Skull]]] when it opened in May so sat with the DVD, on sale today, and was curious to see what sort of experience this would be. After all, the buzz over the summer that while good, it was ultimately a disappointment after waiting so many years.

I was entertained.  The movie wisely moved to the 1950s to reflect the passage of time and evoke an entirely new feeling.  As a result, the Roswell setting, the Crystal Skull possibly being an alien, etc. was all appropriate as was the arrival of the Cold War nemesis, successors to the Nazis for storytelling fodder.

However, Spielberg and Lucas got too cute from the get-go with the Caddyshack-like gopher  popping up as we began the story.  While winks to those no longer with us, such as Marcus Brody were fine at Indy’s home, the statue’s head striking a blow was unnecessary.  While immediately understanding the locale from John Williams’ evocative score, we didn’t need to see the Ark.  Too many winks at the expense of good storytelling.

More should have been done to examine Indy at a point in his life when he was getting a little old of adventure and his life was filled with missed opportunities.   Mutt being his son was telegraphed from the get-go and was totally without nuance.  Marion arrives too late for my taste, trades quips but seems to accept the passage of time with a smile and far more forgiveness than she showed in the first film.  Her spunk and edge, which made her extremely fascinating in Raiders was all scrubbed away, making her likeable and far less compelling.  Thankfully, Karen Allen has aged as gracefully as Harrison Ford and they still have some great screen chemistry. 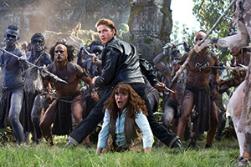 Belloq in the first film was a rival, Indy’s mirror opposite, a great screen villain.  Every foe he’s faced since have been cardboard and Spalko was no different.  She wasn’t interesting until her final scene. While Cate Blanchett chose her look and accent based on research, her character was flat, wasting her skills. Similarly, Ray Winstone’s double/triple agent was entirely extraneous and cluttered the film.

The rest of the cast such as the too-briefly seen Jim Broadbent and always reliable John Hurt were fine but honestly, there were too many of them along for the ride, undercutting the ability to focus on the core characters and relationships.

The movie once more gave in to Spielberg’s excesses so just about every action scene went on too long and needed trimming, especially the chase through the jungle. Action is certainly a major reason we enjoy these films but there was a gravity that worked so well with the first and third films that was entirely missing here.

The two-disc DVD set comes with a crisp version of the film that looks and sounds just swell.  On the second disc, there’s an interesting and slickly produced Production Diary that goes from the first day of filming to the wrap.  There are other featurettes on post-production, pre-visualizations, iconic props and the like.  Some fun tidbits comes across showing the depth of dedication there was to the film, to Spielberg and to [[[Indiana Jones]]].  There is a also a brief piece that acknowledges the behind-the-camera crew, showing them at work and listing their names which is a nice thank you from the producers to the entire team.  Some of the other potential extras about the entire saga were of course served up in the spring’s lovely box set of the previous three films.  This one is a nice addition, especially for fans.