MARC ALAN FISHMAN: “Super-heroines,” Get Back In The Kitchen! 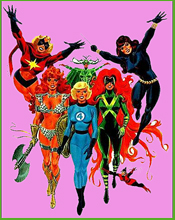 So after a few weeks of daydreaming and being all cutesy-wootsie, I figure it’s about time I stir the pot a little. Let me get behind this wire mesh wall, force field, and don some protective gear. There. Safe and secure. Ahem…

Don’t believe me? OK. Name the first few Marvel superheroes that come to mind. I’ll give you a minute. Who did you say…Spider-Man? Thor? Captain America? How about Iron Man? Hmm. No double X chromosomes there. The last big event to revolve around a woman? Oh yeah! House of M. The one where Marvel showed that a chick who ain’t barefoot and preggers goes crazy and resets the universe at will. Now there’s a feather in a feminists’ cap.

When I say “important women of Marvel,” aren’t they are always the yin to the yang of a more powerful man? Pepper Potts. Sorry Matt Fraction, you can put a repulsor in her chest, you can give her a code name, but she’s still just Tony’s secretary. Mary Jane Watson-Parker-Watson-by-way-of-a-retcon? Face it tiger, she’s just there to fall off buildings. Maria Hill? Nick Fury’s assprint hadn’t even cooled off before she was ousted back down to who-cares-ville. And when we open the discussion to those ladies who carry the hero badge? It doesn’t get any better.

Sue Storm, the matriarch of the Future Foundation. The soul of the Fantastic Four. Completely boring and useless without her husband. The best writers of Sue have always pegged her as a strong and independent woman. But take her away from Reed, Ben, or the children and the only bullet point left on her resume is part-time booty call for Namor.

Black Widow: slut with guns. How about Ms. Marvel? I’ll be completely honest. I don’t know a thing about her. Best I could tell? She was brought in because Marvel has no Wonder Woman, so they threw her on the Avengers. Beyond that I assume they keep her around because cute girls can show off their butts by cosplaying as her. What of the X-Men? Well, Jean Grey has died only 17 times, and has changed names to various permutations of “Phoenix,” all to what effect? She’s Cyclop’s gal. She maybe did Wolvie in a closet while Slim was waxing his car. And in the Ultimate Universe, maybe she did Charles too.

Let’s not forget Storm. She was married off to Black Panther so they could make super-black-babies that will invariably land on some future iteration of the X-Avengers. Not because they’ll be well written mind you… but they will add that “affirmative action” flavor John Stewart was used for back in the JLA.

I say this obviously not just to be cranky. I openly yell to the heavens for someone to come in and make the women matter again. Joss Whedon put Kitty Pride and the White Queen front and center in his amazing run on Astonishing X-Men. More than that, he made them more than worthless eye-candy in butt floss. He gave them dimension, and class. They weren’t in peril for perils’ sake.

Given Whedon’s pedigree for good female characterization, it didn’t come as a surprise. Whedon aside, other Marvel writers certainly have the know-how. Matt Fraction, Brian Michael Bendis and Jonathon Hickman are all amazing writers who know the ins and out of nuance. They’ve each made the females in their books (yes that includes Pepper in the aforementioned Iron Man series) very potent. But my gripe remains the same.

It’s not enough to write a woman as powerful, smart, and put-together. It’s the act of writing them as such that they are more than decoration. Throughout Marvel’s recent history, it’s been a literal boys-club. Civil War? Captain America and Iron Man fighting in the sandbox. Secret War? An excuse to make Norman Osbourn king of the playground – until sales dipped, and people stopped caring. And now we have Fear Itself, which as far as I can tell is only an excuse to half-kill Thor, and dress everyone up in Tron-stripes.

I yearn just once to have a female character in any of these situations stand up and set the world straight. Not to say it’s happened in the DC ever… but I actually believe Marvel has the smarts to actually do it. In this day and age where the DCnU turns Starfire and Catwoman into sultry sluts with no character trait beyond their cup size… I look to the House of Ideas to set the industry right.

When DC was making up Kryptonite and the color yellow the ultimate weapons against its heroes, Marvel figured out that debt, responsibility, and a guilty conscience was far better. Let us hope that in the coming times, they take the next step and realize that women are more than tits and tiny costumes. They are the fairer sex, the stronger characters, and perhaps the last untouched resource for superior fiction.