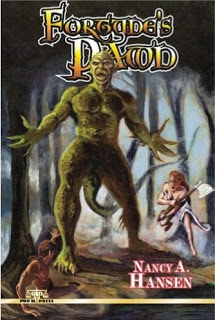 Okay, let’s establish something right away: I don’t generally read fantasy. I did when I was younger, really digging Dragonlance and the like… but nowadays, the only time I read fantasy is when I dig open a Robert E. Howard collection for old-times sake. So I’m not really the target audience for this one. But I’ve read some short stories by Nancy in the past and enjoyed them so I figured I’d dive into her first novel and see how it went.

First impressions: the cover is intriguing but I really, really would not have obscured the title. This is okay if it’s Spider-Man or something: we all know what the title is anyway so breaking it or obscuring it can be a bold design move. But when it’s an unfamiliar title (especially one that’s rendered in a confusing font), I think it’s not bold… I think it’s not wise. I showed the book to three different people and not one of them could figure out what the title was from the front or spine — the font chosen was way too busy. It looks like the book is called Forgude’s Pawd.

Okay, once I got past the cover design issues, I jumped into the story and found that it was told in a very readable style. For some reason the opening with the weremon seemed awkward to me but I think it just took a few pages to get into Nancy’s world. Once things shifted to the ill-fated family, things picked up and from there it all went smoothly.

The basic premise is classic and familiar: a prophecy warns that a red-haired child will rise up to overthrow the bad guys so the villains are out killing everyone with red hair. One infant survives such an attack and grows up to become our protagonist. Callie is an enjoyable character and her motivations and emotions are well depicted.

I found the parts of the story featuring conversations between characters or internal monologues to be the best part of the tale. The action scenes were clearly depicted but lacked the kind of edge that I usually like in my fantasy (think Robert E. Howard’s ability to depict sweaty violence). I was impressed by Nancy’s willingness to get her literary hands dirty, though — no one is safe in this book, including little kids. Everybody has an equal opportunity to get eviscerated.

This is obviously the first chapter in a larger story and I’m curious about where it goes from here. If I were a diehard fantasy fan, I think this would be something that would definitely go onto my shelf of favorites. As it is, I would still recommend it to anyone looking to dip their toes into the fantasy genre or who are looking for a character-driven adventure of any type.