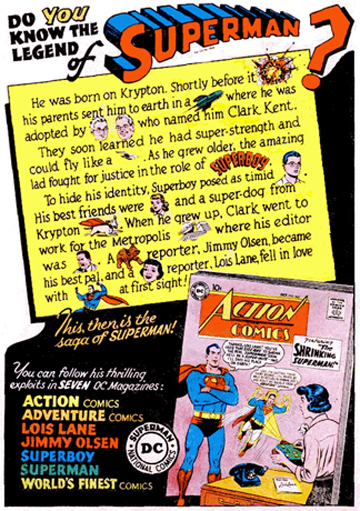 If my calculations are correct – and that might be a first – the comic book advertised in the house ad above was released 53 years ago this week. DC fussed with the cover dates since this book was published, but I think I’m on this one. The house ad itself was designed so that the production department could easily swap out the covers, and here’s three of the others to appear in that slot: 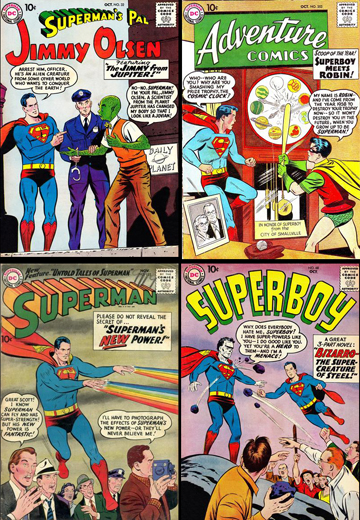 (Don’t be concerned about Superman having a different cover date; DC had different schemes for monthlies, 8x yearlies, and bimonthlies.)

In 1958 those were four extremely compelling covers. Superman having a new power was a big deal, and rainbow covers always sold better than the norm. “Jimmy from Jupiter” was a very strong concept back at that time, and it was one of the first of the famous Jimmy Olsen transubstantiation stories.

The same thing is true for the Superboy story. It introduced Bizarro, the first super-villain to become an adjective. Editor Mort Weisinger knew he had a good story after its Superman-oriented dry run in the newspaper strip: he hyped it in the previous issue of the title, which was a rare event.

But that Adventure Comics cover was the killer: crossovers were few and very far between, and time travel crossovers were all the more rare. This issue must have sold well, as Mort endlessly repeated the stunt with other characters. Today we’d think that a no-brainer, but back in 1958 it was a very big deal.

So it was a good week or two for the Superman Family. And it was a very good week for me, as I had just turned eight years old and was at the optimum age for these stories.

Even then, my father was concerned about my obsession with comics. He didn’t have a problem with comics per se, just the fact that it became my religion. It was sort of a Jazz Singer thing. But we were visiting a relative and my father wanted to keep me occupied, so we stopped at a drug store next to the relative’s apartment building and he told me I could pick out three. I already had the Superman, so I had to pick from Action, Jimmy Olsen, Adventure, and Superboy. Of course I begged for all four – I would have anyway, but this time I was as insistent as I was ineffective.

Problem, problem. I had been waiting for the Bizarro story for at least a month, and the Superboy – Robin crossover was more important than life itself. So the choice came down to “The Jimmy From Jupiter” and “The Shrinking Superman.”

The problem is, even though that issue of Action Comics was redistributed two weeks later I never found it on the newsstands. In fact, I didn’t find it until nearly 15 years later, and it cost me over ten bucks.

I told that to my father, thinking I could guilt-trip him by exploiting his deep appreciation for the buffalo. But, as usual, he outwitted me. Dad said that I was eight and I would have not kept the book in good condition and, therefore, would have bought it on the collector’s market anyway.

One thing more. This house ad? It spawned a deep love for rebuses. A teevee game show called Concentration where the gimmick was getting the contestants to solve a rebus took to the air the very same week as these various Superman titles were released. To add insult to injury, the original run of the show ended 14 years later, roughly the same time as I bought “The Shrinking Superman” at a comic book convention.