MINDY NEWELL: Where’s Superman When You Really Need Him? 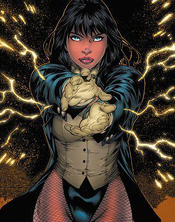 Apparently, I can run for mayor of New York City because – to paraphrase Sarah Palin – I can see New York from my house.

I live in Bayonne, NJ, across the Hudson from the city, about two miles from Lower Manhattan as the crow flies, and on a good day, and if I judge the timing right, I can zip through the Holland Tunnel and be in the city proper in about fifteen minutes. (Then there’s rush hour L.)  Seriously, right now I’m looking out the window at New York Harbor, Staten Island and the Verrazano-Narrows Bridge (its proper name) are to my right. Directly across the water is Brooklyn – on a sunny clear day I can see the cars moving along the Belt Parkway without binoculars – and to my left is the Statue of Liberty and the skyline. I can even see the Brooklyn, Manhattan, and a hint of the Williamsburg Bridges. I can watch the Macy’s July 4th fireworks from my roof.

I love my view. Like a cat, I like to sit and look out on the water and the harbor traffic and the constantly changing colors of the sky. Most of the time it’s glorious.

But sometimes, things happen. Like on September 11, 2001. For a week I kept the blinds down, because I couldn’t bear to see the smoking emptiness where the towers had stood. It only helped a little, especially at night, when the mega-million kilowatts of giant spotlights and the still-smoldering embers of death and destruction would break through the slats.

Like today, as the metropolitan New York area prepares for the arrival of Irene.

Yesterday I was one of the scoffers, as Mayor Bloomberg, Governor Christie, and other officials in New York and New Jersey announced mandatory evacuations and closings of the transit systems and roadways. (Governor Christie closed the Garden State Parkway heading south from exit 98 – which is the “entrance” to the Jersey Shore – as of 6 P.M. because he wanted to keep all lanes available for evacuation and emergency vehicles.) “Oh,” I said to anyone who would listen, “It’s the media. It’s a slow news cycle. Obama’s on vacation, Congress is in recess. And we’re coming up on an election year. Nobody, Democrat or Republican, wants to get caught with his or her pants down, like Brownie and Dubbya during Katrina. And anyway, the levees broke in New Orleans. Besides, hurricanes draw their strength from warm water. It may be summer, but the Atlantic up here is nowhere near as warm as it is down South or in the Caribbean.” And on and on I went.

I even got into a fight with my daughter, who lives in lower Jersey City, over evacuating. “Why are you gettin’ crazy?” I said when she said she wanted to come to my house last night, which was Friday. “It’s not even going to be here until Sunday morning.  Wait and see. The Giants haven’t cancelled the game against the Jets, they only moved it to start at 2 p.m. instead of 8. If they cancel the game, then it’s time to worry. It’s football. They never cancel games unless it’s a real emergency.”

Alixandra and Jeff are now in my living room. They came over last night. Well, Alix came over. Mandatory evacuation because of storm surge. Jeff, who was at Oberlin in Ohio being oriented as a new professor, had to drive all night to get here because not only was his flight cancelled, all area airports were closed. He wanted to be here before they possibly closed all roads in. Plus, they’re in love. If I lived a few blocks or a mile to the west or east, I’d be mandatory evacuated, too. I don’t have to worry about flooding, but will my windows hold up? What about the cell towers up on the roof of my building? What happens if they get blown over, will they coming crashing down through my ceiling? (I live on the top floor.) This morning I walked down the street to the supermarket because I didn’t have any teabags, and I love, no, I need, my tea in the morning. Do I have to tell you what a madhouse that was? The store was actually running out of food and water. Later I drove past my local gas station. Well, I inched past my gas station, because the gas-rationing days of 1979 were back, with twenty or more cars waiting in line at both entrances to fill their tanks. Mine was already filled.

Irene is coming. Storm clouds are gathering outside my window. It’s her. There’s a monsoon outside my window. Wait, it stopped. No, it started again. A warning. She is approaching. There was no breeze earlier. Now the leaves of the trees are rustling. Irene is near. I hear a police siren. And an ambulance.

My refrigerator is stocked. But what if the power goes out? Alix brought over shit none of us have eaten in years. Like Chef Boy-ar-dee. (Yum-Yum) I got Twinkies and Entenmanns’s and potato chips. Hey, they’re not called non-perishables for nothing.

Anyway, all this got me to thinking. If Thor was here, he could stop Irene – after all, he is the God of Thunder. All he’d have to do is swing Mjolnir around and poof! there goes Irene. Or if the Flash was around, he could run circles around Irene, break her up into little squalls. If Storm was in the area – wait, does she still live in Westchester? – she could simple command Irene to back off! Green Arrow and Hawkeye could launch some type of special chemical arrows that would cause Irene to collapse into herself. If Zatanna was here – !yawa og, enerI

Instead we sit here waiting. For the full force of Irene to strike.

Yeah, where’s Superman when you need him?