GRIOTS is an anthology co-edited by Milton Davis and Charles Saunders featuring fantasy stories based on African mythology.  ALL PULP is pleased and proud to present an interview with Milton Davis so he can tell us first hand about this ambitious and exciting anthology.  Enjoy!
All Pulp:Let’s start with an easy question: who is Milton Davis?
Milton Davis: Milton Davis works as an R&D Chemist during the day in order to hide his identity as an obsessed speculative fiction writer during the night. He a husband of 25 years and father to two children, a boy and a girl. He currently resides in Fayetteville, GA. 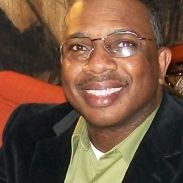 AP: How long have you been writing?
MD: I’ve been dabbling at it since college but got serious in 2005.
AP: What writers have influenced your style and interests?
MD: The main two are Frank Herbert and James Baldwin. Herbert blew me away with Dune and its world building. James Baldwin captured me with his simple but powerful prose.
AP: From where do you draw your inspiration?
MD: I’m inspired by many things but the main inspirations are art and music. Of course I’m also inspired by history, specifically African history.
AP: Before we get deep into this, a bit of explanation first: what is a Griot and why did you choose GRIOTS for the title of the anthology?
MD: Griot (gree-oh) is a French word used for the traditional African storyteller/historian. There are many other words used among different African people; djeli, jali, gassere and gewel just to name a few. We chose GRIOTS because it fit what we were trying to accomplish.
AP: For those who are unfamiliar with the term what is Sword and Soul?
MD: Sword and Soul is fantasy, heroic fiction and sword and sorcery based on African culture, tradition, mythology and history.
AP: Tell us about some of the talented writers who are in this anthology.
MD: We have a wide variety of writers. Some are independent writers like me; others are mainstream published. Some have never been published before and others have been published in other genres. What we all have in common is an appreciation of Africa and a desire to based stories on this wonderful and diverse continent.
AP: Are there plans for GRIOTS to be a yearly event?
MD: I don’t know about yearly but there will be a GRIOTS II next year.
AP: Can you tell us what you learned about putting together an anthology like this? Was there a certain order you put the stories in?  Were there certain themes or stylistic choices on the part of the writers that took you by surprise?
MD: GRIOTS is my second anthology. I did the preliminary work for GENESIS, the Black Science Fiction Society anthology. So this wasn’t difficult to do. The main challenge was getting writers to meet deadlines. Creative people are allergic to deadlines. We hoped that the writers participating would expand the interpretation for Sword and Soul and they did. There are stories that stick close to the definition and there are others that hint at the source. I think readers are going to be very entertained.
AP: What was it like working with Charles Saunders?
MD: It was excellent. Charles is one of the nicest and most gracious people I know. We’re Sword and Soul brothers. We have a lot in common; we were even born in the same month. His excitement about this project was one of the main reasons it came to be.
AP: People of color haven’t been well represented in the genres of science fiction, fantasy and pulp adventure in the past.  Are you seeing a definite and hopefully lasting change in that representation through not only your work but that of other black writers and artists?
MD: I definitely see a change. In mainstream publishing folks like Nnedi Okorafor, N.K. Jemison, David Anthony Durham and others are making great progress. However I think the greatest changes have and are going to take place in independent publishing. With POD and e-books breaking down the gates to reader access we finally have a chance to expose everyone to our work and our perspective. Add to that the growing black middle class and readership, it’s a good time to be a writer of color if you’re willing to work hard to make it happen.
AP: What’s a typical Day In The Life Of Milton Davis like?
MD: I’m up early to cook (yes, cook) breakfast and do a little writing. Then it’s off to work. Once I get home I take a few hours rest then write some more.
AP: Here’s your chance for a shout-out or to plug something; Go.
MD: A special shout out to all the folks who kept encouraging me to pursue my passion. I hope I’m doing you proud. Oh yeah, buy GRIOTS. You’ll love it.
All Pulp: Anything else we should know?
Milton Davis: Sword and Soul is just getting started. 2012 is going to be a special year. I have a few surprises in store.  Peace! 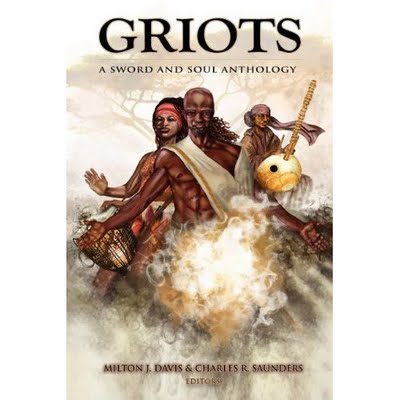