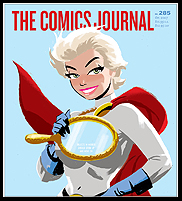 Inevitably, when discussing the best way to market comics to a larger, non-indoctrinated audience, someone will suggest “good writing and art” as the sure-fire remedy.

The mirror image of this is accusing publishers of employing “cheap publicity stunts.” I was on the receiving end of this charge from Gary Groth of The Comics Journal when he was questioned about the Death of Superman in USA Today. Naturally, I was miffed, because I thought my salary proved I was not cheap.

(I’m sure that’s the occasion when the most people ever thought about The Comics Journal.)

The premise, in any case, is incorrect. Or, rather, it should be. In publishing, the editorial department should decide what to acquire (or, in the case of comics and other work-for-hire situations, solicit) and the marketing departments (which include publicity) should promote this material to the people who would most enjoy it.

It never works like this. Publishers want to attract the largest possible audience, and they’ll instruct editors to jump on the latest trends, whether that’s sword and sorcery, black and white indies, steampunk, graphic novels, television and movie adaptions or whatever. You’ll notice that’s a jumble of genres and formats, not a single directive. That’s the kind of thing that makes editors lose their hair.

But wait! There’s more! Sometimes marketing people think they know more about what makes a book good than the editors. I’m thinking of one person at DC (now a vice-president) who boasted to retailers that he wouldn’t promote a book he didn’t like. I have no doubt that he thought this was the honorable thing to do, but it does a disservice to his employers and to the retailers. The marketplace is not made up of people with exactly the same taste as this vice-president. By limiting the options he offered to them, he limited their sales.

I didn’t like every book I promoted. However, I knew that there were potential readers for every book, people who would be entertained and amused and involved. I didn’t necessarily know these people, but I wanted them to be happy, so I wanted them to know about our comics.

It’s not a perfect system. At the time, DC published about 70 titles a month across all imprints. There weren’t enough mainstream media outlets to cover that much. I had to pick and choose what was most relevant to the media I was pitching. Again, trying to match the story to the potential audience was the key. I’m sure I made mistakes in my choices. I’m sure some worthy projects didn’t get their share of attention.

No one is going to argue against quality. It’s like arguing against apple pie and Mom. Maybe there’s an opposing side, but only opinionated and obnoxious people like Mike Gold and I like to argue for the sake of arguing. And because of our Talmudic tradition.

Unfortunately, when it comes to comics, quality is like obscenity – I can’t define it, but I know it when I see it. And what I see as quality you may not.

Lots of people enjoyed the Death of Superman storyline and its follow-ups, and lots of comics cognoscenti sneered at them for enjoying it. A lot of these people are preemptively sneering at the New 52. I hope they’re wrong. I hope it works.

I hope it brings happiness to millions.