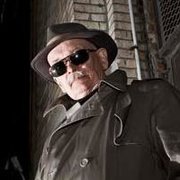 The Sinestro to whom I refer is the comic book villain who morphed into a character in a film that recently abandoned a multiplex near you titled Green Lantern, as opposed to all the other Sinestros in your life. He is humanoid except for a truly odd complexion and he has the kind of moustache that was sported by such luminaries of yesteryear as Clark Gable, William Powell and Thomas E. Dewey, who was a politician and thus not like all the other Thomas E. Deweys of your acquaintance.

I have no trouble with the complexion – after all, the dude was born on Korugar – but that moustache kind of niggles me. I am an evolutionary (he boasts, thrusting out his chest) and so have no problem believing in the theory of parallel evolution (which, according to Wikipedia, posits “the development of a similar trait in related but distinct species descending from the same ancestor” and that’s all the classroomy stuff I’ll inflict on you this week, I promise.) So what we have here is an ancient something-or-other that left… what? seeds? germs? – on both Korugar and Earth, and these eventually spawned sentient bipeds and what we jokingly refer to as civilizations, and so forth…As noted above: no problem.

But can we stretch our parallel evolutionary hypothesis so far as to accommodate the belief that on both Korugar and Earth there evolved alpha males with a penchant for decorative lip hair? If we can, the story might go something like this: Sinestro’s mom had a schoolgirl crush on the Korugarian version of Gable, Powell, or Dewey (or could this wannabe vixen have had a crush on all three? could she have been that profligate with her unrequited affection?) She gave birth to the infant Sinestro and, as the lad was growing up, continually impressed on him that real men – we’re talking macho studs who are suave, witty, sophisticated and ooze testosterone – these magenta-complexioned winners insist on having hirsute upper lips?

Oh, my… we could spin the speculation further and guess that the adolescent Sinny found that he could not raise decent facial hair and the frustration of having to disappoint Ma caused him to mull the possibility of becoming evil and by the time his hormones kicked in – on Korugar, puberty often comes late? – he had pretty much decided on a career in villainy? (Could the tale take a Faustian turn and narrate young Sin’s bargain with a Korugian devil who traded a handsome ‘stache for the lad’s immortal soul? Oh, my, my, my…)

We will resist further speculation and merely suggest, hat in hand, head bowed, that regardless of what may or may not have occurred on Korugar (and are you sure it doesn’t exist) the makers of Green Lantern might have decided against adding a moustache to the already cumbersome makeup they inflicted on actor Mark Strong and…

But wait! The fellow in the Simpsons t-shirt is telling me that according to one version of the Sinestro origin, the character was actually modeled on British actor David Niven. Well! I’m glad we cleared that up.