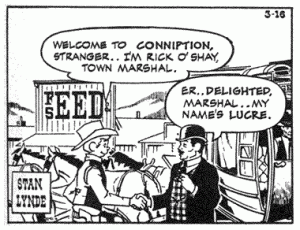 In this very space a few days ago, John Ostrander said, “By this time next year, we may know if we’re still viable or making buggy whips.” He was referring to comics creators, to comics fans, and to the entire comics art medium.

The first person I heard refer to comics with this term was master cartoonist Stan Lynde. In case you’re challenged in matters relating to newspaper comic strips, Stan was the creator and writer/artist of the strips Rick O’Shay and Latigo. He’s a master storyteller, a brilliant humorist and an artist of fantastic prowess. The time was close to 20 years ago, and Mike Grell and I were at a very enjoyable comic book convention at Billings Montana. One of the promoters promised to introduce me to Stan. This was a real fanboy moment for me.

As it turned out Stan and Lynda Lynde were two of the nicest people on the planet, and probably the universe. After dinner (where I consumed the best prime rib ever), they invited Mike and me to their place in the bluffs overlooking Billings. There Mike and I gazed upon acres of Stan’s paintings, original strip art, awards, historical memorabilia, and simply awesome sundry stuff. We talked for several hours and the subject got around to his career. Stan shared all kinds of great stuff – how one of his assistants was Robert Crumb, who, in many respects, was the anti-Stan Lynde. How Little Orphan Annie creator Harold Gray was an egotistical, arrogant bastard – those are my words, not Stan’s. And how, when he was coming to the end of his tenure his signature creation Rick O’Shay, his first wife asked him how long he was going to be making buggy whips.

That phrase impressed me. Were newspaper strips buggy whips? Maybe. Continuity strips certainly were – today, we have Dick Tracy, Gasoline Alley, Alley Oop, The Phantom, Mandrake, Judge Parker and barely a handful of others. Tracy’s picked up a few papers since our pal Joe Staton took over the art; on the other hand I know Mandrake is still alive solely because it’s online at King Features Syndicate. But the argument itself stayed with me, and during the past two decades I’ve endured the effluvium of the buggy whip factory as it surrounded the comic book medium.

The fact that the newspaper comic strip form remains alive is due to the Internet: a lot of newspapers run lots and lots of strips on their websites and the major syndicates have very low-cost services which email comics directly to their subscribers.

Not to put words in Brother John’s mouth, but the Internet is the only thing staving comic books off from the buggy whip wing of the American cultural museum. I think John’s right: we should know in about a year if that works. If not, ComicMix will become, oh, I don’t know, either a B&D site with all those whips, or a B&B site where you can score a nice home cooked meal.

As we passed midnight Stan drove us back to our hotel. As we were walking to the door and I said something to the effect of “hot damn.” Brother Grell responded, “You better believe it.” Even then Mike and I were two hardened veterans of the comics racket but we effortlessly allowed ourselves to bathe in the most crystal clear waters of fanboy heaven. We shared a truly inspirational time and we actually leapt up in the air out of our shared enthusiasm.

And that’s why I think comics might just have a future after all.