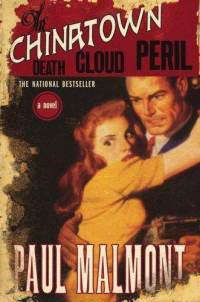 I realize that I’m coming rather late to this novel, which was published in 2006 and set the pulp world on fire. I’d heard many good things about it but I’d never gotten around to grabbing a copy for myself until now. This book takes the real-life figures of Lester Dent, Walter Gibson, L Ron Hubbard and others and puts them into an adventure that could have been straight out of the pulps they made their living in. The mystery starts with the death of H.P. Lovecraft and soon throws its net a good deal wider than that.

The novel crackles with its scenes that describe the pulp industry of the time, showing the hard life led by the men who were paid pennies per word. Honestly, I could have read an entire book of Gibson, Dent and Hubbard arguing over the proper way to write pulp.

But this isn’t a nonfiction work — there’s fictional elements aplenty at play here and the story ultimately must be judged as both historical fiction and an adventure novel. It’s in that last regard that I feel the book falls a bit flat. Malmont does a wonderful job describing the main characters and their neuroses but the action sequences didn’t have the crackle of old-time pulp and the central villain stopped the narrative every time he appeared. I really could have cared less about him or his motivations.

Special word must be given to the epilogue, which is narrated by a special character that made me smile. I was somewhat surprised by the “revelation” that Lester Dent retired to La Plata to write Doc Savage and Avenger novels “for many years.” Though The Avenger was always credited to Kenneth Robeson (the same pen name that Dent and others used on Doc), The Avenger novels were NOT written by Lester Dent. They were the work of Paul Ernst, a wonderful pulp writer who never seems to get the proper amount of respect.

There are many who will tell you that this book is the best that New Pulp has to offer. I disagree. It is very good and I think it does an admirable job of reaching out to the non-pulp audience, informing them of the field’s past and those who worked in it. But I found myself comparing it to Wayne Reinegal’s books, which also mix real-life figures with adventurous settings. If forced to choose, I’d go with Reinegal, who manages to both inform the reader and create genuinely thrilling action-oriented plots, to boot. Still, this book is well worth your time and if you’re a pulp aficionado, you should look for it ASAP.