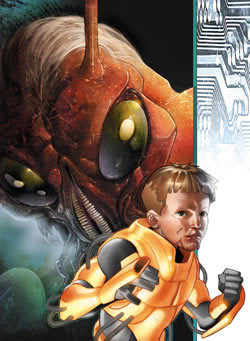 Marvel continues to expand on its comic adaptations of literary properties with the news out of Comic-Con that a six-issue miniseries of Ender’s Game is on the way.

The famed sci fi series was written by Orson Scott Card, who also has written Ultimate Iron Man for Marvel. The artist on that book, Pasqual Ferry, has signed on for this new Card project, which is scripted by Christopher Yost.

"I’m a fan, a big fan. So talking with him was one of the best experiences that I have had working on comics so far," Ferry told CBR News. "When talk of the adaptation started, Orson sent a lot of explanations and details about environments, outfits ships. It was a nice work of discovery and creativity between [Editor] Nick [Lowe], Orson and me."

Ferry said "Ender’s Game" is rich with quality ideas and concepts, giving the artist plenty to explore and develop when bringing the book to life visually. He gushed, "The human feelings of the characters and his interrelatedness of the work, the incredible quality of the story, the Battle Room action sequences…"