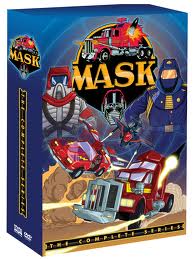 One of the earliest comics series I inherited as an editor was M.A.S.K., based on the toys and cartoon series. I have no recollection how or why DC Comics acquired the comics rights but it was handed to Mike Gold shortly after he arrived on staff. He tapped the versatile Mike Fleisher as the writer, helping burn off contractual obligations. Better, he assigned the artwork to Curt Swan who needed something regular to produce after losing the Superman assignments. Inking was Kurt Schaffenberger so at least it looked good. I helped Mike get the series up and running then edited it a few issues before I handed it off to Mike Carlin to wrap up.

I never played with the toys or watched the cartoon, but thanks to Shout! Factory that can be rectified as seen in the following press release:

This Summer, loyal fans and collectors can finally bring home one of the most enduring animated adventures from the 80’s when the long-awaited M.A.S.K.: The Complete Original Series DVD box set debuts nationwide on August 9, 2011 from Shout! Factory, incollaboration with FremantleMedia Enterprises. Poised to attract an audience of kids, young adults and parents who grew up with this animated series, this 12-DVD box set contains all 65 action-packed episodes – known to fans as the original series aired in 1985, as well as insightful bonus features.  A must-have for collectors to complete their pop culture video library, M.A.S.K.: The Complete Original Series is available for pre-order now from Amazon.com and major retailers.

Throughout the years, M.A.S.K. boasts a large fan following and spawned a series of toyline, comic books and video games. The complete original series of M.A.S.K. has been sub-licensed to home video distribution to Shout! Factory by FremantleMedia Enterprises.

Not Rated: For all audiences