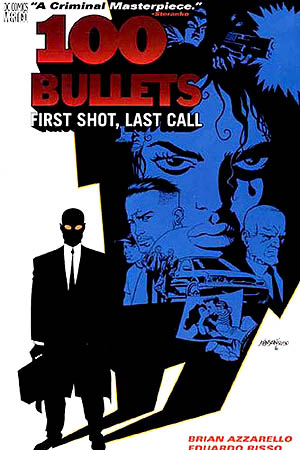 This weekend, Bleeding Cool found a potential slip by Geoff Johns that hinted the Eisner and Harvey Award-winning Vertigo comic [[[100 Bullets]]] by Brian Azzarello and Eduardo Risso was coming to TV as a series.

Now Deadline reports that screenwriter and comic writer David S. Goyer (Blade, The Dark Knight) is going to write and executive produce the show for Showtime .

If you aren’t familiar with the series, here’s the setup: a man comes to you and gives you a briefcase with a gun, 100 untracable bullets, and proof incriminating the person who done you wrong– offering you a chance to exact justice for themselves with no danger of being caught. What do you do?

(Incidentally, I’m impressed with Deadline’s comment threads– more bile than Newsarama comments, possibly because much more money is discussed than what you usually see spent on comics.)