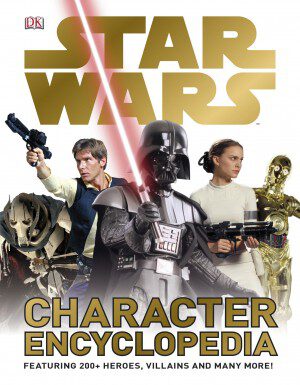 The Star Wars Universe spans thousands of years and multiple galaxies, telling the eternal story of good versus evil time and again. The saga has expanded to such a degree that you really cannot tell the players apart without a scorecard. For those who dislike clicking their way through a dizzying array of droids, Jedi and colorful aliens, there are now a series of guidebooks to help you. Last year there was DK Publishing’s The Star Wars: Clone Wars Character Encyclopedia or their Complete Visual Dictionary or even the incredibly useful Year by Year: A Visual Chronicle.

DK Publishing knows how to recycle information in all manner of sizes and shapes, synthesizing the data in new ways for its eager audience of readers of all ages. Editor Simon Beecroft has honed those skills as an author, having previously written Inside the Worlds of Star Wars: Attack of the Clones among other titles. He’s back with this breezy look at George Lucas’ sprawling universe in the Star Wars Character Encyclopedia.

Despite telling us the comic books, RPGs, and novels are part of the greater canon, this book only focused on characters from the six feature films and the CGI-animated Clone Wars television series. Also, given the trim size of 7.25” x 9.25”, DK’s designers had to rein in their normal frenetic design. While that can be seen as a plus, the smaller size also means the amount of detail provided for each character is little more than can be found on a trading card.

You read a page and know from repeated viewings of the movies that there are vital details missing. The Obi-Wan Kenobi page, for example, ignores his guidance and counsel provided to Luke Skywalker after his corporeal form was struck down by Darth Vader. Anakin Skywalker’s page ignores the term “midichlorian” and omits his transition to the dreaded Sith lord. Similarly, Vader’s page refers to him as being Luke’s dad but his given name is missing. I guess there’s only so much information you can give when you present each character with equal weight despite having much more to say about Luke, Leia, Han and Darth Vader than you have to a Hoth Rebel Trooper, a Rancor, Coleman Trebor, or a Colo Claw Fish. Popular players, such as Wedge Antilles, don’t even get a page but is crammed into a page about the X-Wing pilots. From what I can tell, the facts here are only what has been presented on screen, nothing new is provided.

Beecroft writes in a clear, alert style that is easily comprehensible for those only casually familiar with these people and does a nice job condensing things down to their basics. But Star Wars fandom tends to prefer depth and detail so may come away from this disappointed.

As a result, the book feels incredibly lightweight and incomplete so despite DK proclaiming this a must-have book for all ages, this is more a primer for younger readers less familiar with the mythos. If you want a true encyclopedia, DelRey’s more authoritative three-volume offering is for you.