GUEST REVIEW OF DOCTOR JONES’ EXHIBIT…INDIANA JONES, THAT IS!

While I was in Montreal last week there was no way this long-time Indiana Jones fan was going to miss the exhibit of movie props and costumes from all four movies at the Montreal Science Centre. Throw in my lifelong love of all things related to movie making and you might even say I had a Jones for it.
The exhibit was a lot of fun and, although we were forbidden to photograph the pieces on display, there was no law against mentally recording the wonderful treasures from the four films for the sake of this review. So here goes! 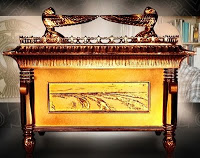 Upon entering the hall, guests are given an interactive screen with headphones. Each item on display has a number and by punching that into the screen, visitors can hear information about what they are looking at. For the most part, I found this information of little value but the first recording is an introduction to the exhibit by Harrison Ford who sounds like he’s reading (Blade Runner narration anyone?) but, hey, he’s Indiana Jones! He can do what he wants!

Visitors are greeted by the full Jones costume: hat, weathered leather coat, whip, pistol, shirt, pants and scuffed up shoes. This was a real treat for this fan and one of the highlights of the exhibit.
The displays are organized in the chronological order by film so let’s cover them this way.
RAIDERS OF THE LOST ARK

The Raiders exhibit featured the fertility idol that almost gets Indy crushed by that giant ball in the opening sequence from the first movie. The plans of how they did the stunt are also included. Marion Ravenwood’s full costume from the bar scene is also there and it was a treat for this movie fan to admire the detail of the outfit. And what would a bar be without bottles, cases and the shot glasses from the drinking contest. But of course, every Indy fan knows that the key to the bar scene is the amulet Major Toht is willing to play with fire to acquire and that too was there for all to see. The workmanship that went into

these props really has to be seen to be believed as they go by so quickly on the screen. Balloq’s priest outfit from the ceremony where he and the Nazis attempt to open the Ark of the Covenant was another example of the incredibly detailed work that went into the costumes. One of the Egyptian sarcophaguses from the snake filled burial chamber was also a treat. But, let’s face it, the prop we all want to see from the first movie is the ark itself and there it was in all its glory. It’s held up pretty well over the last 30 years and, again, the level of detail and high lustre on this large prop is breathtaking.
TEMPLE OF DOOM

Okay, it’s not everyone’s favorite Indy movie but it is part of the series and there were some nice pieces to feast the eye upon.

This part of the exhibit was about costumes. Indy’s tux and Willie’s nightclub dress are on display as is Short Round’s complete outfit right down to the shoes/blocks he uses for driving. Sticking with costumes, Willie’s sacrificial dress is also included here as well as Mola Ram’s head dress.
Other props include the jade jar that kicks off the opening action sequence and the Sankara stones themselves are here. I don’t know what the ‘stones’ are made off but they give off a special radiance all their own. Rounding this part of the exhibit is the miniature mining car with the mini-Jones/Willie/Round dolls used to film that ridiculous mine car chase through the caverns.
THE LAST CRUSADE

As one of this fan’s favorite Indy films, it was a real treat to linger over the props here – and there are a lot of them.
Young Indy’s scout hat kicks things off followed by the Cross of Coronado which Indy hunts into adulthood. Again, the cross is wonderfully detailed and looks as old and as precious as it is supposed to be. Dr. Elsa Schneider’s outfit from early in the film is here as is the suit and bow tie Indy wears while teaching. Wonderful period clothes all. Indy’s dad’s glasses and pocket watch are also here and what display would be complete without Indy Sr.’s grail notebook. What a treat it was to look over the carefully scrawled and weathered pages.

There are a lot of props from this third instalment. The shield from the catacombs, the rubbing Indy makes of it. The crucifixes worn by the defenders of the grail are also here as is the “Leap of Faith” artwork. And they’ve included the grails! Both Walter Donovan’s poor choice and Indy’s correct one are here and it’s fitting that the simple cup of a carpenter outshines the jewel-encrusted grail which looks more gaudy to the naked eye than it does up on the screen.
THE KINGDOM OF THE CRYSTAL SKULL

It comes as no surprise that there are more props from the fourth Indy film than from any of the previous three. Being a more recent production, I’m sure tracking down this stuff did not require an Indy-calibre archaeologist.

Props galore! Mutt’s jacket, gum, switchblade, and motorcycle are here as is the letter urging him to hunt down Indiana Jones. And there are costumes! Irina Spalko’s outfit makes an appearance and you can read her file if you’re brave enough to get that close to her sword. Professor Oxley’s outfit is another marvel of the kind of detailed costume work being done these days. And his drawings are also on hand.
You’ll also be able to feast your eyes on the skull that mesmerizes Indy and a full-sized alien skeleton in its chair from the end of the film. Throw in the ancient texts Indy refers to, some of the booty traitorous McHale tries to make off with, Orellana’s mummified ‘corpse’ and death mask which are incredible pieces of work and this latest and, perhaps, final Jones adventure is well represented.
OTHER GOODIES

Although the exhibit features Indy props and costumes, the purpose of the display is supposed to stir interest in archaeology. To that end, there are a number of exhibits featuring real ancient finds. From ancient Greece and Rome to North American Indian artifacts, these run the breadth of human history and were very interesting. A small section also covers some real archaeologists and there is a lot of information on how they dig up the past.
To be honest, this stuff was interesting but was not what I showed up for. As a movie buff, film and TV background perfomer, pulp fan and pulp author, I was there to wallow in all things Indy and that is precisely what I did. 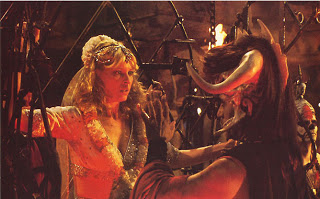 Summing up, I would recommend the exhibit. The entry price of $23 seemed a little high but as a fan I was willing to pay it as I’ve been a fan of the movies for three decades now. A great gift shop had a number of Indy shirts to choose from and I picked out a couple of nice ones.
On the downside, the headsets/screens were dull at best and I skipped most of what was there to listen to. A good idea that went sour was the inclusion of TV screen showing many of the scenes in which the numerous props were used. This was a great feature but people tended to crowd around them, watching the movies, and blocking the props! It struck me as strange that folks would pay $23 to watch scenes from the movies that they could see at home! The exhibit is about the props and costumes people! 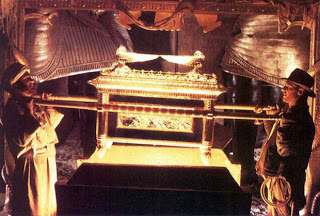 I really enjoyed reliving the fun of the movies through the props and costumes. If you’re an Indy fan, I’m suspecting you will as well. So if Indiana Jones and the Adventure of Archaeology comes to your town, plop that fedora on your head, make sure that bullwhip is coiled tight and slip into that leather jacket, you’ve got some exploring to do!