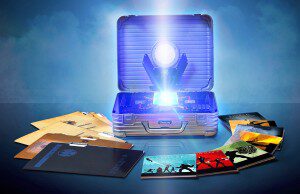 You know you’re saving up to buy Marvel Cinematic Universe: Phase One – Avengers Assembled but now you might need to save a little longer once you see the packaging. As revealed yesterday at MTV’s Splash Page. The package looks pretty sweet.

Additionally, Entertainment Weekly showed off the poster promoting the short film Item 47, which will be found on the Avengers Blu-ray disc. Copies of the poster will be given away following an Exclusive Premiere Screening at San Diego Comic Con later this week.

Here are the promotional details surrounding this event:

In anticipation of upcoming home entertainment release of Marvel’s The Avengers, Marvel is unleashing an all-new alternate reality game (ARG)  that ultimately grants the first 300 fans with special access to an exclusive, premiere screening of Item 47, a Marvel One-Shot , fan experience & Special Filmmaker/Talent Q&A at Comic-Con.

Beginning on July 6th, Comic-Con attendees can download the all-new App – The Avengers Initiative: A Marvel Second Screen App (at the iTunes store) – that will not only garner fans unprecedented access to exclusive content building up to the home entertainment release but also give them access to partake in the alternate reality game (ARG) at Comic-Con.

Beginning on Friday, July 13th, fans will be able to start solving special codes, that when unlocked, will guide them to their next clue. The App will also have a built in map of the Gas Lamp District in Downtown San Diego that will guide them to their location spots. There will be a total of 4 spots.  Fans must complete the entire ARG experience in order to redeem access to the special screening.