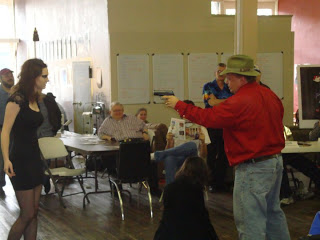 Sunday, May 15, 2011
The theater day opened at PULP ARK with a rousing fight scene involving most of the cast that took two of them literally tumbling down the stairs into the middle of a panel!  After that, the cast gathered and presented the third and final act of this fast paced, high adrenaline Pulp play like no other!  And without further adieu….

ACT THREE
(Puff of smoke, SHEVARA appears)
SHEVARA-I have fed on the horror and hatred of a world gone mad and power flows through my body once more!  Trapped far too long in one prison, then another cage, reduced to nothing but ink and words by a trifle of an insect! No More!  I reentered life here so from here death shall spread!  And upon the bodies, the bones, the charred remains of humanity I will build my throne…my castle…my universe…starting here!
MERLIN-(Steps out in front of Shevara) Sorry, but I’ll have to see your building permits.
SHEVARA-What??
MERLIN-Permits….To build a throne…not to mention the red tape you’ll get tangled in trying to build your own universe.
SHEVARA-You speak nonsense!  What do you think, that you alone can stop one that your insipid ancestors worshipped as their own Goddess?  You, one pitiful little girl…
MERLIN (As she talks, all the former cast members who weren’t killed start coming out, forming a circle around her, each of them holding some kind of weapon)  Been a long time since anyone’s called me little girl.  But only my Daddy could do that and you don’t even step close to my Daddy.
SHEVARA-I own you, rodent!  You and all like you exist only to give me power, to feed me with all the sin and terror your kind produce! You cannot stand against me!
MERLIN-I’ve stood against bigger than you, supposed deities who have whole books written about them.  You barely rated a pulp magazine!
SHEVARA-YOU SHALL BE THE FIRST TO DIE, THE CORNERSTONE I WILL BUILD MY THRONE UPON! DIE!
(SHEVARA zaps, shoots, something and MERLIN goes down…SHEVARA laughs evilly but is surprised as MERLIN stands up, grasping her shoulder)
SHEVARA-What? NO! No human can challenge the magic of SHE WHOM ALL FEAR!!

MERLIN-I told you I’ve gone one on one with monsters that make you look like Little Bo Peep.  I’ve picked up a few things and skills along the way.  This is barely a flesh wound.
SHEVARA-WHAT???
MERLIN-School’s out, sweetheart! NOW!
(Coordinated fight scene between SHEVARA and everyone with a weapon, but BUSTER never gets quite close.   And each one is defeated, not killed, but laid low, hurt, etc.)
SHEVARA-SHE WHOM ALL FEAR RULES ALL!  SHEVARA STRIPS ALL HOPE FROM HUMANITY!
BIM-Okay, distract and sneak attack didn’t work…any other notions?
MERLIN-Givens said something, something about the stanza…it was the key to freeing Shevara…
ROGUE-But also the key to stopping her!
CAPT’N-But who remembers that chant?
PENNY-I do!  I made sure I listened closed when Nikola said, just so I could get the scoop on all the other papers!
“Death and hatred,  take you life!
Murder and sin, become flesh and bone!
Walk this earth and spread your strife!
‘less you are laid low by man crafted stone!’
MERLIN-That’s it!  Where’s Newt?  (bolts to find him) Have to find-
NIKOLA-You have to do nothing but die, like Shevara decrees, dear Merlin
MERLIN-Nikola, what are you doing? We have to stop her!
NIKOLA-No.  I have realized that even though I do not control her, her will and my plans are the same.  I have served her and not even known it.  And I will continue to do so….by killing you.
SHEVARA-OH LOOK!   THEY FIGHT BECAUSE OF SHEVARA! ONE EAGER TO DIE, THE OTHER EAGER TO FEED ME!  HATRED AND PAIN FOR SHE WHOM ALL FEAR!
(Fight scene with Nikola and Merlin, Nikola gets beaten, Merlin stands up) NEWT! Where are you?
NEWT-Here, Merlin!
(Merlin starts to cross to Newt, who is close to Shevara, but Nikola rises, grabs her.  Newt sees this, runs for Merlin, runs in front of Shevara, who grabs him)
SHEVARA-Ah, even the tiny ones throw themselves at me to sate my appetite.  Mmmm..this one is thin, but so full of energy that I can turn to hatred!
NEWT-Let me go!! Leggo!
MERLIN-NEWT, YOUR NEWSBAG! HIT HER WITH YOUR NEWSBAG!!
(Newt does just  that, smacks Shevara hard with his newsbag.  She looks as if she’s been shot with a bullet..Pain on her face.  She lets Newt go and stumbles, very clearly dying…
SHEVARA-Man…crafted…stone…from…a child….(She collapses, smoke if possible.  Lights go out.  When they come back up, Nikola and August are gone.  Penny is standing up slowly)
PENNY-What-What happened?
LITTLE SISTER-PENNY!
BUSTER-One minute she was a reporter, next minute she’s a demon goddess…now that Shevara frail is gone..vanished ! POOF!
BIM-Yeah, and so are Nikola and her pet boy!
MERLIN-Not like we didn’t expect that! Or like we won’t see them again.
CAPT’N-What is suprisin’, though, is that this yellow sapsucker stayed.
ROGUE-With eveything that I am, I’m not a sneak away type.  Besides, I figure we’ll all make scarce soon enough.  No one wants to be here when badges and sunglasses come through the door.
PENNY-I have to go to, have to get this story in, though no one will believe it.  But I don’t understand what happened.  How did Newt’s bag get that out of me?  How did it kill a demon??
MERLIN-Show ‘em, Newt.  Show ‘em what’s in the bag.
NEWT-THIS! (holds up a brick)
MERLIN-The incantation warned Shevara that she may be ‘laid low by man crafted stone.’  It’s part of the binding.  Whoever originally came up with the way to trap her built into it a weakness she couldn’t escape.  Once she was captured the very first time, the weakness stayed with her.  And bricks are
EVERYONE-Man crafted stone.
BUSTER-So she’s dead?
CAPN’-Probably.  At least gone.  But just to be sure, we need to destroy the Bloody Pulp.
MERLIN- (walks up)  No, no you don’t.
CAP’N-Eh? Whattya mean?
MERLIN-When…whatever that thing was disappeared…the Bloody Pulp did, too. I recovered it after Nikola threw it down yesterday.   But it’s gone.  It and the parchment.   Up in a green cloud of smoke.  And now we have nothing to show…nothing to exhibit….
BIM-And I’ll bet you old Givens’ body, wherever it was restin’, is gone, too! It always goes like that!  We have nothing!
PENNY-And no one will believe me…
MERLIN-Well, you both have eyewitnesses and the participants in what just happened.  You know, those who saved the world.  We could tell the story for you.
ROGUE-And what of those authorities I mentioned, Merlin?
MERLIN-Like Bim said, Simon, there’s nothing.  No evidence.   Just great stories.
NEWT-EXTRA EXTRA, READ ALL ABOUT IT, CASE OF THE BLOODY PULP CLOSED! WORLD SAVED FROM DEMONIC DESTRUCTION! MERLIN MONTGOMERY AND  HIS COMPANY OF HEROES OF THE DAY! EXTRA! EXTRA!
THE END
Since the end of PULP ARK, there has been some clamoring for further adventures of this crew. I am already writing the sequel.  There has also been discussion of turning this play into a story and writing other stories with this cast.  If you’d like to see that, please let me know either through comments here or at proseproductions@earthlink.net – Tommy Hancock