I’ve had a very strange feeling the last few months.

I’m not talking about that feeling you get when you think that history isn’t going along the right path and that you’re living in an alternate universe where people you know and love have changed– I’ve had that feeling since December 12, 2000.

In the summer of 1986 at 106 West Broadway, Port Jefferson, NY, Flashpoint was a comic book shop with a bit of a sideline in science fiction and robots. It was arguably the best store on the island. Yes, there was Port Comics down in Medford which Brevoort swore by, and the Batcave in Bay Shore, although they might have renamed by then, Fourth World was still in St. James in a store not much larger than my bedroom. But to get a better store with a wider selection, you had to make your way into Forbidden Planet on 12th and Broadway or drive out to Staten Island where Jim Hanley had a store.

Flashpoint was the place where a lot of people bought [[[Watchmen]]] as it was coming out. And The Dark Knight Returns and Green Arrow: The Longbow Hunters. Frank Miller was back on [[[Daredevil]]], Alan Moore still found time to do [[[Swamp Thing]]], and those sold like crazy. Claremont was at the top of his game and the top of the sales charts with [[[Uncanny X-Men]]], Walt Simonson was still on [[[Thor]]], and there was this different book Marvel had called Strikeforce: Morituri. They bought their first copies of [[[Robotech]]] and [[[Mage]]] from Comico; [[[Nexus]]], [[[Badger]]], [[[GrimJack]]], and [[[Jon Sable Freelance]]] from First; [[[Miracleman]]], Zot! and DESTROY! from Eclipse, and there was that new series called Dark Horse Presents from the guys who had that teddy bear kill off all those Turtles and all the other ripoffs, and that series called Ex-Mutants from that new publisher Malibu… Airboy, Blue Beetle, Booster Gold, Elektra: Assassin, Elementals, Elric, Espers, Grendel, Justice Machine, Legends, Omaha the Cat Dancer, Reid Fleming, Secret Origins, The ‘Nam, The Shadow, Usagi Yojimbo, X-Factor…

…and if that wasn’t enough, there were [[[Bloom County]]] tee-shirts sitting next to books of the [[[The Far Side]]] and this new collection of a comic strip that Newsday wasn’t carrying yet called [[[Calvin & Hobbes]]]…

I was working there, and spending a lot of what I earned on the new comics. Hell, wouldn’t you? Didn’t you?

There was a community to the place– a lot of comic pros and people getting into comics spent time there– Jim Fern lived in an apartment right upstairs, Mark McKenna used to come in just as he was leaving his job at the art store down the street to become one of Romita’s Raiders and on to a full-time inking career, John Buscema and Don Heck came in on occasion. But there were the regulars, from the people who rode the bus from SUNY/Stony Brook to just about everybody east, and the people who took the ferry from Connecticut and didn’t know about Dream Factory in their own state. And of course, the owners Sue & Terry, the manager Nancy, and my coworkers Jim, Eugene, and Marc.

I wish DC all the best of luck with their summer crossover, but it’s going to be really tough for them to top the original. Because for me, Flashpoint really was where comics changed forever. 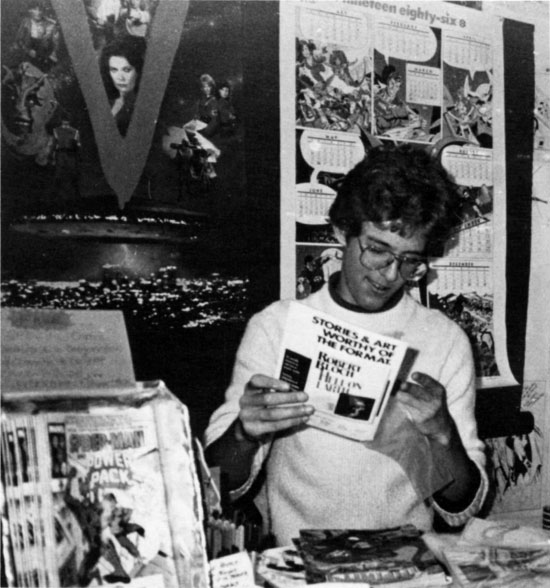