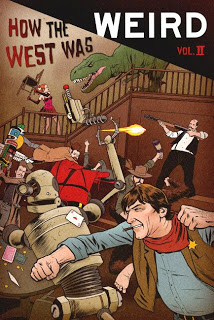 Want To Win An Advance Copy Of HOW THE WEST WAS WEIRD Vol. 2?How the West Was Weird, Vol. 2, the most recent installment of the best-selling anthology series from Pulpwork Press, is scheduled for release on July 1, 2011. At more than twice the size of the previous volume, this book is bursting at the seams with cannibals, aliens, robots, sasquatches (sasquatchi?) and their adventures in the Old West.

So how would you like to win a free copy, a month before anybody else gets it? If you already own volume 1, you’ve got a chance.

Here’s what you have to do:

1) Post an honest review for How the West Was Weird, Vol. 1 on

Amazon.com (either for the print or Kindle version).
2) Email Editor Russ Anderson at RussLee74 at gmail dot com to let him know you did it.

That’s it. Post a review and let him know about it. How easy is that?

(And no, the reviews don’t have to be positive. Write what you feel. If you blast the book, he’ll cry softly, so you won’t hear.)

Contest ends on May 31. One in ten entrants win, so the number of prizes depends on how many reviews we get. The drawing will happen on May 31, and the books will be sent out June 1. This contest is not open to the writers who wrote stories for either volume 1 or 2. 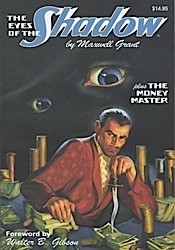 At RadioArchives.com, we love the thrills, chills, and excitement that only a great pulp fiction story can provide. That’s why we’re excited to announce that two brand new reprints featuring the top heroes from the 1930s and the 1940s have just arrived and are now available from RadioArchives.com:

In “The Shadow Volume 48”, the Dark Avenger continues the celebration of his 80th anniversary in an extra-length issue that pairs his explosive second adventure with a gripping novel of international intrigue. In “The Eyes of The Shadow”, the Knight of Darkness assumes the identity of Lamont Cranston to investigate a series of baffling serial murders in a groundbreaking novel that introduced the Shadow’s famous alter ego and his enigmatic agent, Burbank. Then, can The Shadow stop “The Money Master” before his financial machinations destroy the global economy? This instant collectors’ item, priced at just $14.95, showcases the classic cover paintings by George Rozen and John A. Coughlin, the original interior illustrations by George H. Wert and Paul Orban, two never-before-published articles by the Shadow’s creator Walter B. Gibson, and historical commentary by Will Murray. 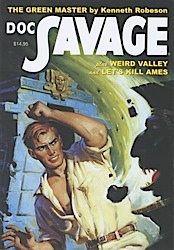 Then, in “Doc Savage Volume 47”, pulp fiction’s legendary Man of Bronze returns in three action-packed thrillers by Lester Dent, writing as Kenneth Robeson. First, when a man claiming to have found the secret of eternal life is murdered, Doc Savage journeys to Mexico searching for an answer in the remote “Weird Valley”. Then, only the Man of Bronze can provide a beautiful con artist with an antidote for murder in “Let’s Kill Ames”. Finally, a lost city of Incas battles over the strange power of “The Green Master”. This classic pulp reprint, priced at just $14.95, features the original color pulp covers by George Rozen, Modest Stein, and Walter Swenson, plus Paul Orban’s classic interior illustrations and historical commentary by Will Murray.

If you’ve been collecting these beautifully reformatted issues as they are released, you’ll want to place your order for these new books right away. And if you’ve never read a pulp novel, you’re in for a real treat! Be sure to stop by RadioArchives.com today and check out our pulp fiction section, where you’ll find more of the exciting and engrossing tales of Doc Savage, The Shadow, The Spider, the Whisperer, and The Avenger, all available from RadioArchives.com. 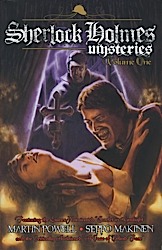 New from Moonstone Books: Sherlock Holmes Mysteries, Volume 1
Ever since his thrilling adventures were featured in The Stand Magazine in 1887, Sherlock Holmes and Doctor Watson have fascinated readers with baffling detective cases set in the dark and foggy streets of Victorian London. Now, Moonstone Books reintroduces the “World’s Greatest Consulting Detective” to a whole new generation of enthusiastic fans in “Sherlock Holmes Mysteries, Volume 1”. This 200 page volume features two graphic novels that pit Holmes and Watson against their most dangerous opponents: Dracula and the Invisible Man!

In “Scarlet in Gaslight”, Holmes teams up with Van Helsing to stop Professor Moriarty’s diabolic invasion led by the master vampire himself, Dracula. Then, in “A Case of Blind Fear”, London is suddenly overcome by a plague of hallucinations. Is it mass hysteria…or is the city haunted by a monstrous and truly unseeable evil?

Written by Martin Powell, with art by Seppo Makinen and cover art by Gary Carbon, this new interpretation of Sir Arthur Conan Doyle’s timeless characters is priced at just $22.95 and is sure to occupy a special place in the library of any Baker Street Irregular or mystery buff. Be sure to add a copy to your next order with RadioArchives.com – and, while you’re there, be sure to check out the many other provocative volumes published by Moonstone Books. Whether it’s graphic novels, short story collections, or the long-lost radio adventures of Doc Savage, you’re sure to find something you’ll enjoy! 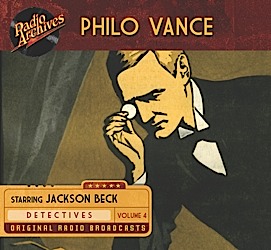 Also New in Old Time Radio: Philo Vance, Volume 4
When we think of radio’s detective shows, we tend to think of the film noir adventures of such great names as Phillip Marlowe and Johnny Dollar. But not all of radio’s criminal investigators came dressed in gumshoes and rumpled trench coats. In fact, one of the most popular and long-running series featured a detective who was something of a well-pressed dandy – and his name was Philo Vance.

Vance first appeared in a series of novels written by S. S. Van Dine. In the books, Vance was portrayed as a stylish fop, a New York bon vivant with a highly intellectual bent – and a nose-in-the-air attitude to match. But by the time he hit the airwaves in a syndicated series for the Frederick Ziv Company, he was far less a know-it-all and far more down to earth. As portrayed by radio veteran Jackson Beck, Vance was knowledgeable but accessible, working closely with the police to solve their most baffling crimes. He was an expert investigator, with a sharp eye for detail and a second sense that could quickly see through shaky alibis and questionable testimony.

For listeners who enjoyed being armchair detectives, the series offered an extra bonus: in traditional whodunit fashion, at the end of each show, Vance would usually gather the suspects, restate all of the clues, and then pause a moment before announcing the name of the person responsible for the crime. This subtle little feature, along with excellent performances by the cream of the New York radio world, resulted in a series that would be popular on radio stations throughout the country for many, many years.

If you’re looking for truly enjoyable audio entertainment – and particularly if you love being an armchair detective yourself – you can’t go wrong with “Philo Vance, Volume 4”, another great sounding compact disc collection from RadioArchives.com. The set offers sixteen of Vance’s most fascinating cases – that’s eight full hours of murder, mischief, and mayhem – for just $23.98. If you’ve purchased our earlier collections featuring this stylish and erudite sleuth, you’ll want to add this new set to your library right away – and it makes a great gift for the mystery buff, too! 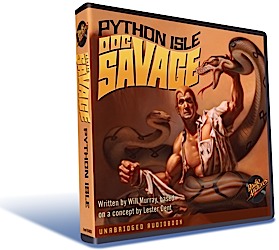 When you think of the exciting adventures of Doc Savage, you think of the best selling double-novel reprints offered by RadioArchives.com. But soon, you’ll be able to enjoy the action-packed tales of The Man of Bronze and many of his Golden Age counterparts in a whole new way.

This June, RadioArchives.com will introduce a brand new series of audiobooks featuring Doc Savage, The Spider, and the other classic heroes of pulp fiction. By special arrangement with the authors, owners, and publishers of these thrill-packed adventures, these full length and unabridged audiobook adaptations will soon be available in compact disc collections, produced in digital stereo and featuring narration by many of the top names in the audiobook field.

The first series of audiobooks will be the Doc Savage novels written by renowned writer Will Murray – starting with his classic adventure story, “Python Isle”. These new audio productions are being produced and directed by Roger Rittner, who created the “Adventures of Doc Savage” full-cast radio series, now available from RadioArchives.com. All of these exciting and collectable audio editions will feature cover art by Joe DeVito, as well as a wide variety of special features.

For more information on these exciting new releases, click here: Audiobooks from RadioArchives.com

Be watching for updates on our website and also special features in our weekly newsletters as we begin the “Countdown to Adventure” with pulp audiobooks, coming to you soon from RadioArchives.com!