A CENTIPEDE, A CYPRIAN, A CITY, AND A WHOLE FANTASYVERSE! PRO SE ANNOUNCES NEWLY ACQUIRED LICENSES! 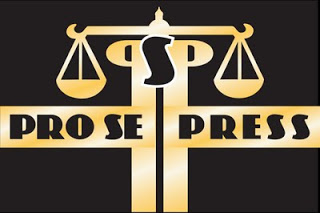 Tommy Hancock, Partner in and Editor in Chief of Pro Se Productions announced today the licensure of several new characters, some already previously a part of Pro Se’s magazine line up.  In the last two months, Pro Se announced that its three magazine titles would be making the transition to yearly anthologies and that Pro Se, still living by its slogan ‘Putting the Monthly Back into Pulp’, will produce a full length novel, anthology, or collection every month.   In line with this shift, Pro Se has begun acquiring licensure on characters being used in its stable as as well as acquiring new characters, the most notable and first example of this being the acquisition of Barry Reese’s THE ROOK and all related concepts three months ago.

Today Hancock unveiled even more acquisitions by Pro Se, having this to say about each of them-

“Pro Se Press is honored and welcomed to announce that author Chuck Miller, already well established as an online producer of New Pulp, is bringing his single greatest creation and all that goes with it to Pro Se!  Chuck’s BLACK CENTIPEDE is definitely a character rooted deeply in the golden age of Pulps, but also a concept riddled with layers, conspiracies, and enough angst to satisfy any modern reader.   THE BLACK CENTIPEDE and all related concepts will be a part of the Pro Se lineup beginning with the debut of Chuck’s first full length CENTIPEDE novel, CREEPING DAWN: THE RISE OF THE BLACK CENTIPEDE, in August 2011 from Pro Se Press!  And be on the lookout for extras, peeks, and goodies from the mind of Chuck Miller and the universe of THE BLACK CENTIPEDE!” 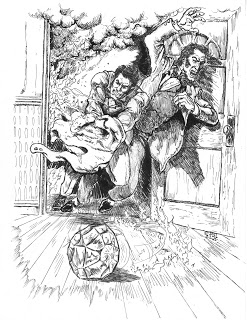 “Pro Se Press is known for being an avenue for both new writers and those who have established themselves in the New Pulp field.  It is with great pride and honor that we welcome another star from the galaxy of New Pulp to Pro Se.  Joshua M. Reynolds, author of DRACULA LIVES!, JIM ANTHONY: THE HUNTERS, and author/creator of MR. BRASS, is bringing another stellar original creation to Pro Se Press.  CHARLES ST. CYPRIAN is an Edwardian monster-hunter who, along with his spunky side-kick in post WWI England has adventures complete with plenty of thrills, chills and the occasional spill.  This action packed, humor laden series is one that adds a facet to Pro Se Press that everyone will thoroughly enjoy!  Look for the first St. Cyprian work, billed as ‘A Unique Novel with a Novelette’ entitled ‘OUT OF BLACK AEONS’ will debut from Pro Se Press in March, 2012!” 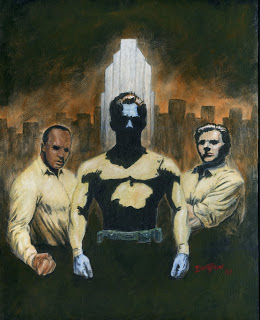 “Readers and followers of Pro Se Press are familiar with THE SOVEREIGN CITY PROJECT.  If you’re not, this is the brainchild of myself (Tommy Hancock), and noted pulp authors Barry Reese and Derrick Ferguson.  Originally conceived for the Pro Se magazine line, each author created an individual character that had its adventures in Sovereign City, a setting all three characters cohabitated within.  I am completely excited to announce that THE SOVEREIGN CITY PROJECT, one of the most ambitious current New Pulp projects, will continue.  Barry Reese’s LAZARUS GRAY, Derrick Ferguson’s FORTUNE MCCALL, and my own ‘DOC DAYE, THE 24 HOUR HERO will continue as licensed characters for Pro Se Press.  Look for a back to back three month slate, starting in September with the first LAZARUS GRAY collection, followed in October with the Doc Day novel, DEATH MEANS LITTLE, and wrapping up with the first FORTUNE MCCALL collection.  And that’s not all!  Sovereign City fans need not worry for there will be plenty more from this trio of writers, including Barry Reese’s first full length Lazarus Gray novel, DIE GLOCKE!  Welcome to Sovereign City and to Pro Se Press!”

“Many writers have great ideas!  Many writers write a few of those ideas.  Not many writers write their own creations so prolifically that they very quickly become sort of their own universe.  Fortunately, Pro Se Press does have one of those writers.  Fantasy pulp author Nancy Hansen has been a mainstay of Pro Se’s magazines since our inception and will continue to be the same into the future.  Nancy not only has one or two characters that Pro Se is tickled to death to license and to publish, but literally she brings a multitude of heroines, villains, creatures, adventurers, and even pet dragons to Pro Se’s pages for you to read!  From ‘Masquerra and the Storm Lord’ to tales about to Roshanna the Huntress, the Windriders of Everice, the Vagabond Bards, The Silver Pentacle, the Companion Dragon Tales, The Song Heroes, and many more, Nancy is definitely a New Pulp powerhouse and will be bringing hours and hours of enjoyment and adventure to readers from Pro Se!  This great legacy begins in June 2011 with FORTUNE’S PAWN, the first book in the Roshanna The Huntress/Greenwood cycle and Nancy’s debut novel!!”

Hancock promises that these are only the first of fantastic announcements regarding licensing new characters and bringing both established Pro Se authors and new faces into the fold to help Pro Se continue to be one of the leading forces in New Pulp!