Given how much fun is present in animating super-heroics, it’s interesting to note that feature film makers eschewed delving into the genre. Maybe they were scared off by the iconic Fleischer Studio Superman shorts from the 1940s or were disdainful of the subject matter. We got the first taste of what could be with the wonderful and underrated [[[Iron Giant]]]. It’s little surprise, then, that its director, Brad Bird would produce the first feature animated film to focus on super-heroics with the marvelous Pixar production [[[The Incredibles]]].

In 115 glorious minutes, Bird and company wonderfully honored the tropes of herodom while telling a strong story about good versus evil and more importantly, about family. Much has been written about the Parr family resembling the Fantastic Four, but the number is about all they have in common. Instead, we’re looking a far better version of No Ordinary Family that is filled with lovely touches among the characters.

You’ve got Bob Parr, forced into retirement, going slowly to pot, and itching to resume his heroic activities. He does so, aided by his best friend Lucius “Frozone” Best, defying his loving wife Helen, who has become the pliable homemaker. Their powerful children Violet and Dash have hidden their powers while dealing with the deadly rigors of high school. Slowly, though, events pull the Parrs back into their outfits and are all that stand between the nasty Syndrome and annihilation. But there are things like seductive beauties, fashion designed Edna Mode and a track meet that all play a part of the action. And watching from the sidelines is young infant Jack-Jack, whose powers, if they exist, have yet to manifest themselves as we meet the neighbors.

The script, from Bird, clearly shows its affection for the comics that were the source material, but there’s more than a little James Bond in the mix as seen in the set designs and score. There are tons of nods to the core geek audience but plenty of visual humor and knowing family bits of business to keep the movie accessible to young and old alike. Pixar once more carefully tread the fine line between making a purely kids’ movie and a genuine, well-executed family event.

Walt Disney Home Entertainment has finally given us The Incredibles in Blu-ray today and the package is a full one with two Blu-ray discs, a standard DVD version plus the digital copy. As one might expect, the digital transfer is a four-color wonder to behold and the action-packed story looks great in high definition. Just as cool is the sound which features the stirring, emblematic score by Michael Giacchino. 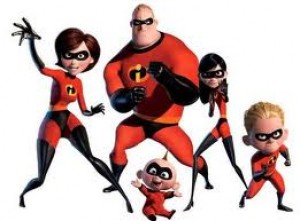 Also, well, incredible is the wealth of extra material found on the discs. Not only do we get the goodies from the original standard DVD release, but we get plenty of new stuff to enjoy. All two hours of the original bonus material is retained and well-worth a second look, from the Jack-Jack shorts to the commentary. In fact, there are two commentaries to pick from: the thematic discussion from Bird and producer John Walker and one with the Supervising animators Tony Fucile, Steven Hunter and Alan Barillaro and animators Gini Santos, David DeVan, Jureha Yokoo, Dave Mullins, John Kahrs, Robert Russ, Angus MacLane, Travis Hathaway, Doug Frankel and Peter Sohn. Slightly less interesting is “The Incredibles Revisited”, a 22 minute roundtable discussion including Bird, Walker, Fucile, story supervisor Mark Andrews, supervising technical director Rick Sayre, production designer Lou Romano and character designer Teddy Newton.

There are new features that take full advantage of the Blu-ray’s interactive capabilities such as “The New Nomanisan: A Top Secret Redevelopment Plan”, the tour of Syndrome’s island headquarters. The amazing 35 minutes of deleted scenes from the first release have been upgraded to high-def so you should sit through these again.

You get the usual Paths to Pixar feature which, as a whole, is an eye-opening look at who manages to work at the coolest shop in Hollywood and how they got there. Also amusing is “Studio Stories: Gary’s Birthday”, another installment confirming the above. The final new piece is the all-too-brief “Ending with a Bang: Making the End Credits”.

Non-Incredible material includes the award-winning short Boundin’ that comes with optional commentary, as does the Jack-Jack Attack short. The latter comes with the brand new picture-in-picture featuring, displaying storyboards in concert with the actual short.

Finally, there are new and familiar Easter Eggs galore and for Disney Rewards Members, a code for a free ticket to see Pixar’s latest, Cars 2. A free ticket plus four discs featuring a spectacular movie makes this an irresistible package to own.