This week we bring you the first half of a SUPER HEROINE story appearing in the recently released Moonstone collection, CHICKS IN CAPES!  The staff behind this project, from editors through the writers, artists, and all others involved are women and put together not only super hero fiction from a feminine perspective, but also produce some of the best action, drama, and adventure you’ve read anywhere in a long time!  Enjoy Elaine Lee’s tale, MISCHIEF, this week on CLIFFHANGER FICTION! 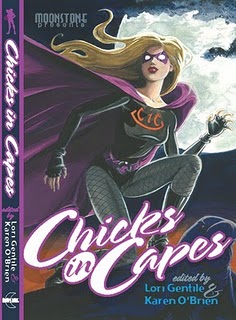 ORDER YOUR COPY OF CHICKS IN CAPES HERE-
http://moonstonebooks.com/shop/item.aspx?itemid=688

AND AN ALTERNATIVE COVER HERE-